The instant that I heard this debut album by Burnt Out Wreck I was flooded with mid 80s hard rock vibes and it set me to wondering about the band and their background. I have heard quite a lot of retro sounding records this year. To me there seems to be a burgeoning 80s revival in hard rock and metal at the moment.

Regular readers will know that this reinvention of genres gone before is not something that upsets me, it is the natural order of things. However, Burnt Out Wreck are the new vehicle for Gary Moat who was formerly with Heavy Pettin. If, like me, you are not familiar with Heavy Pettin, they were a hard rock band operating out of Glasgow in the period 1981 – 1988. 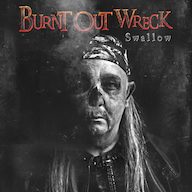 So, we know where Moat’s roots are and we can hear this influence in Swallow but by no means take this to mean that Moat hasn’t moved on, because as comebacks go this is a triumphant one. A record that could easily stand up against its 1980s forbearers as any recent release. It is a great feel-good record, pitched exactly at the place where hard rock belongs to be, a place that is equally as comfortable rocking out, a celebration of life, a life-affirming record. If this album was a beer it would be a session ale. Easily drinkable and can be consumed in large quantities, an album which facilitates conversation rather than dominating it, an album that allows you to party into the night. Part AC/DC, with overtones of early 80s Whitesnake, this is a record that you are going to turn to again and again.

When it comes down to some track-by-track analysis this is rather an unusual album; what we are presented with is eleven tracks that could all easily have been lead singles. They are similar in nature but genuinely there is not a bad track on there. It ranges from a little bit more laid back rockers to full on party AC/DC but they are all great.

Take album opener “Burnt Out Wreck”. It’s actually one of the more melodic and laid back tracks on the album but it still rocks and has a great chorus. Choruses are something that Burnt Out Wreck seem to have spent their lives perfecting. “Burnt Out Wreck” has a great late 70s feel to it to me. Very Whitesnake, perhaps a touch of Ronnie James Dio thrown in for good measure. It is the guitars and riffs that give it both that laid back and nostalgic feel, especially on the slow break down towards the end of the track before one final round of riffs and chorus. Pure 80s hard rock but so well done.

“Swallow” is the lead single from the album and it’s clear to see why they chose this track over the others. Very AC/DC, the opening riffs are almost like a slowed down “Hells Bells” and vocally this is very much Brian Johnson. What Burnt Out Wreck do is more than a nod and shake of the head in AC/DC’s direction as they still manage to carve their very own take on things. The pace is almost addictive and the “Hells Bells”-ish riff throughout the background is bound to be a great hit live.

We are pulled slightly to the modern(ish) day on “She’s The One” which is a hybrid between Whitesnake and Thunder especially in the bridge build up. What I like about all of Burnt Out Wreck’s songs is that they seem to know exactly how to chop between the riffs, the catchy vocals and when to put in a solo and not to overdo any of these elements. It is almost as if the songs are perfectly balanced. Not too much of any one element, not too little of another. It is this balancing act that enables them to write the perfect rock song and sound very much like a whole bunch of other bands you are already familiar with, without this being a problem. The songs themselves do not sound like another song per se, they just have that essence of some of the greats and because of this you can joyously play them and not feel short changed.

“Flames” is another standout song on the album. Again, earwormingly familiar whilst not quite sounding like anything you have heard before. This track and the album overall has that late-night feel to it, where the evening is winding down you have had a few whiskys. It has similarities to Thunder’s Backstreet Symphony but ambience wise I am thinking more of Whitesnake’s Live… In The Heart of the City, their early-late 70s period which for me has an atmosphere (up until now) all of its own. Burnt Out Wreck have managed to capture some of that charisma here.

I mentioned that this is a great rocking album, though there is a slower paced song thrown in towards then end (presumably to allow the listener to draw breathe) and the use of acoustic guitars and the pace works well. What carries this album and any of the songs within it is that Gary Moat is an excellent vocalist who uses his voice to great effect. What is important is that he knows his voice and its limitations and years of experience means he is able to bring a melody and storyline to any backing track

So, overall, this is a hugely enjoyable album that can be consumed in large quantities. Years of experience have come together to give a fantastic new life to a period of music I always really enjoyed. If these guys are getting out on tour I would highly recommend going to see them. If this album was a session ale I would be staying for another one for the road. I like session ales.

Swallow is out now