Before this album dropped into the mailbox I hadn’t heard of War Cloud before. I plucked it out of the pile as it was labelled simply as “heavy metal” and the cover art reminded me of Iron Maiden’s “Aces High” single. It turns out that they have two albums available (War Cloud and State of Shock) and that Earhammer Sessions is a “live in the studio” recording of their recent live set which spans those releases. It also turns out that it’s very, very good indeed. 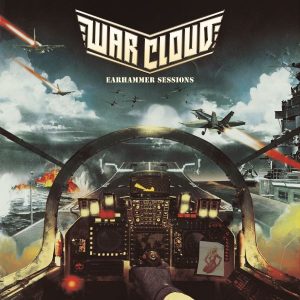 With an image that matches their music – leather, denim and tattoos – War Cloud throw out the classic 80s metal that I was nursed on. Blending Maiden-esque squealing guitar solos with throaty Lemmy-like vocals, they don’t hold back and things kick off at full tilt with “Vulture City” and “Give’r” (the video for the latter is below).

Like Motörhead, they’re not ashamed of a bit of blues and that influence comes through in “Chopper Wired”, though they definitely prefer the more up-tempo sounds. “White Lightning” is as fast as its namesake, and it sets up the second half of the album that ploughs through the chunky “Divide and Conquer”, “Tomahawk” which alternates between plodding and thrash metal, “Speed Demon’s” rubber-burning soundtrack and “Striker” which brings us full circle to the opening numbers.

Earhammer Sessions reminds me of so many classic acts that I can’t name them all. There’s nothing original on here, but that’s what’s so damn good about it. You feel right at home from the first song even if you’ve not heard it before. It’s no frills, balls out, old fashioned heavy metal. And it’s a thing of aural beauty.

Earhammer Sessions is out now