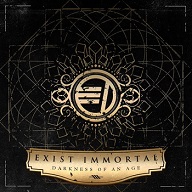 Here’s a band I should have seen live before now as they supported Ravenface on (what turned out to be) their farewell tour in November last year. Instead, I got the nod from their PR that they’re touring in May and have their debut album out on the 12th of the month.

Darkness of an Age is ten tracks of dark, melodic progressive death – if I’ve covered all my genres correctly. Low-tuned guitars twang the rhythms while vocals hop between harsh and regular. The mixed genres do exactly that – they mix. Much as it may seem a fair bit to cram into one band’s sound, they make it all so natural.

There are five guys in the band, with vocal duties shared between Meyrick and Tom (who also does guitars), with Kurt as the other 6-stringer, David on Bass and Fergus on drums. Together they produce a fairly distinctive sound that should appeal to a broad section of the metal audience.

As with all of my Band of the Day posts, the idea is to get you guys to give them a listen and decide for yourselves whether you like them or not. As such, enjoy a track embedded below (or the whole album is currently streaming over at Terrorizer!) and if it’s to your taste them consider picking up the album and/or seeing them on one of the upcoming live shows:

The digital release is only a fiver (or more – be generous!) while the CD/poster pack is a bargain at £8. There are also a couple of t-shirt bundles. You can order it via the bandcamp link below.