Ruadh’s debut album, Sovereign, came out last year and we featured them (him) as Band of the Day earlier in 2019, too. While Ruadh is the one-man project of Tom Perrett, he has formed a band for the purposes of recording this second album. He covers all instruments but we also hear the talents of Cieti (female vocals), Kimberly Copland (bass) and Philip Morrison (drums). So how has their sound evolved since the last outing? 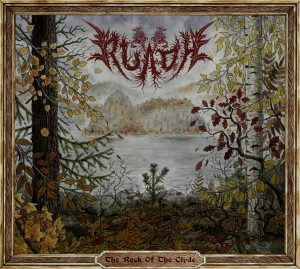 “Embers”, which you can hear below, opens proceedings at a blistering pace before Tom’s vocals kick in. Despite the ferocity, there is some melody – much more so when Cieti’s haunting lyrics are added to the undertone. Indeed, that’s something that the band say they’ve added to their sound, and it works for me. I’m not a huge fan of the “white noise” black metal, but I’ve found a lot of the atmospheric stuff to be surprisingly easy on the ear.

The Rock of the Clyde very much falls into this category. The songs are epic – the first four average ten minute apiece – and are great background music for luddites like me. However, take the time to focus and there’s a lot more there. Ten minutes is a long time to fill with a piece of music and each of the songs on here is more than just that, it’s a story – and a decent story needs time to be told.

If I have an issue, it’s more with the mix than the songs themselves. Tom’s vocals could be pushed a bit more front and forward, particularly his clean ones. Check the title track for instance. They’re audible, but they just feel like they need a bit more “oomph”.

Now, I’m not a black metal connoisseur by any stretch of the imagination, but I know the music I like… and I liked this. There’s so much going on without it getting convoluted and the pacing is spot on. Well worth a punt for those who’d normally think that black metal is a bit too far down the extreme track for them.

The Rock of the Clyde is out on May 22nd