We were rather impressed with Scarlean’s album Soulmates, which we reviewed at the end of March. With the album out not, when better to find out more about the band behind it? 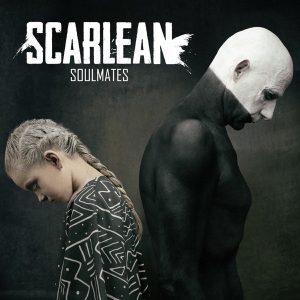 We come from Avignon, the city of the Popes, in the south east of France.

Géo, Fabien and I had played together in a band ”Aquilon”. We had released three albums and performed on stage quite a few times along with bands such as Gojira, Loudblast, Samael, Tripod, Sidilarsen, Yaltering… 10 years after that experience, Géo and I decided to explore new things. That was how this project came to life. Later we worked together on the creation of our first album ”Ghost” before we got a functional line-up. Then we started looking for musicians while creating this album. It took us a while before finding the good match ! Michel joined us in 2017, Bass guitar player Olivier arrived in the band two years later. Finally, the drummer, Fabien, came in 2019. We were able to release our first album Soulmates, all together.

The name Scarlean come from ”scar” and ”lean”. Both words highlight the scars from life that never really come off. They still leave a mark.

I have many different and various ones! We like so many things, whether it be hip hop, jazz, rock, electro or metal. There’s good in every single thing. As for me, I like Dope D.O.D, Sneaker Pimps, Korn, Jeff Buckley or Leprous. I like it when it is melodious and original.

What makes us unique is that we can’t be defined nor classified into a category, at least no one has succeeded it yet ! We’ve heard so much about it ! From power rock, alternative metal, prog, modern metal to djent! You know, we’ve never asked ourselves such a question! We don’t feel the need to limit our music to one single genre. We play ”Scarlean”: emotional, powerful and original. Those three words clearly define us best.

I mostly talk about life, frames of life, things I’ve seen. Death, life, the destruction of our planet, frustration hatred, difference. There are so many themes to deal with, not specific ones but rather a writing style that is both poetic but rough.

We put a lot of ourselves in what we do, in our shows. We are deeply committed. Being authentic is emotionally what matters the most. Each of us is unique. We do not want to format anyone! So each one has his own feelings. Scarlean performed a hundred times. We don’t want to give a long series of concerts. We are more selective as we value quality shows in great places.

I think it was during summer when temperatures rise to 40°C. I felt blackout coming. You know when the sound disappears and you can’t see anything. But you need to finish the job on stage while you feel like you’re about to faint. Because of a kidney stone, I literally played my pain on stage! Funny because people thought I was acting but in reality I was suffering badly! I managed to finish the show and rushed to ER afterwards!

We use a variety of instruments: we have 3 Kemper Amp for the entire set-up. Michel and Olivier play on Ibanez, Geo has an Ormsby Australian guitar, Fabien has DW, Pearl, Paiste and Zildjian. We all work with Shure Ear Monitor that we connect on a computer. All of our set is synchronized on Cubase on MIDI mode. Every sound is performed without any pedal board, which is pretty good! We just focus on playing music.

We are participating in three competitions: Hellfest, Motocultor and Metalhead convention in Paris. We’ve been selected for the Finale in Motocultor, we’re doing quite well in the competition so far for Metalhead Convention in Paris. We need your vote to support Scarlean! We are also working on our new video clip. All I can tell you is that it is going to be huge! 5 days into shooting, a 7*7 green screen, homemade settings, actors and a brand new staging. Since the epidemic outbreak, we haven’t finished yet but working on it. Gonna be awesome!

Many concerts, festivals and musical surprises throughout the year. A lot of things going on but I won’t  say more about it here!

I’d hesitate between A Perfect Circle and Leprous for their universe I love so much! If I had to support one band, I would say The Blackstone or Shrodinger, two talented bands and friends. One being more power rock an the other which is more experimental. We actually have a few concerts scheduled with them around  the end of the year.

Soulmates is out now