In Lancaster, North East England a group of musicians joined forces to become a dark rage of British metal. They call themselves BloodYard. Due to their live performances a fan base around the UK has grown. Being on the Hobgoblin New Blood stage at this year’s Bloodstock festival helped.

Darker Rage, their second EP, is the follow up to 2013’s Set to Fall. BloodYard opens with “Epitaph” Nick Adamson’s guitar riff is of Thor of Norse mythology like hammer strike. Donna Hurd’s vocals are as strong as that wolf that blew down those three little pigs’ homes. 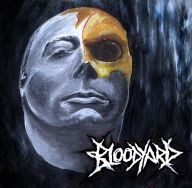 “Sacred to None” is a creeper; it starts slowly with a menacing guitar riff. It would befit the build up to the story of the bogeyman jumping out from under your bed…in your closet in your head. Apologies I went in to a bit of Metallica there. The intro had the same feel as “Enter Sandman” has.

Up next “Darker Rage”, an angrier, heavier sound compared to the previous two. Hurd’s lyrics and vocals are fiery. If you get too close to the speakers, you’ll easily be the victim of bloodshot eyes. This track is probably the most favourable on the EP. A sign for the future.

“Dead Relics” the final part of this ravenous EP. At nearly three minutes long it could be a contender once again for soundtrack to the ending of when the bogeyman does come from under the bed.

Keep an eye out for BloodYard. Although this isn’t the sort of music I go for, I am in-fact content at listening, but, there’s always a but. With the building sounds from Adamson’s guitar riffs, Crawley on bass and Matthew Lee on drums aided by powerhouse vocalist, Donna Hurd, it all shows this band are going strength to strength and will develop more in time.

Darker Rage will be out on November 28th globally and is already available in the UK [amazon text=from Amazon&asin=B00YOSJAZ0] (sponsored link).