Bad Touch recently rescheduled their tour dates (as did many bands), and will now be touring at the year’s end. The perfect time to find out if they’re the kind of act you want to pick up a ticket for – especially as, on this tour, they will indeed be the Headline Act! 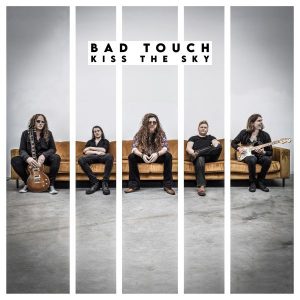 We are Bad Touch. We all hail from the flatlands of Norfolk, yes, we know, not very rock’n’roll, but we’re here to change that.

We’ve been friends for well over a decade now, the guitar lads (Rob G & Seeks) went to school together and often bunked off maths to razz out guns n roses in the music room. (Disclaimer that might not of actually happened, it may have been Motley Crue…)

We formed at the end of 2009, and we have been a solid unit since, we’re brothers.

Oh, do not worry, we are well sick of being asked! To combat this, we change the story every time… We got it from a fortune cookie in Vegas…

Some personal inspirations for me as a singer? There are the obvious contenders, people like; Robert Plant, Paul Rogers, Chris Robinson, Ronnie Van Zant, Freddie Mercury, and so many of the vintage hall-of-fame. Plus, more modern people like; Charlie Starr, Cormac Neeson, Chris Robertson, and Chris Cornell, to name just a few.

We’ve always been and will always be Bad Touch. We play feel-good rock n roll for the soul. Our never-ending mission to give you the night you’ll never forget; a break away from the monotony and tyranny of life, and to leave anybody who is awesome enough to come to a gig smiling from ear to ear. That’s our mantra.

We try and stay real. We try and write about emotions and situations that people can relate to. We also like to stay a little ambiguous so that people can take away what they want from it. That’s the beauty of art, there’s no right or wrongs.

Sitting here during the third national lockdown, I would describe our shows as euphoric. I’d give anything to be crammed on a tiny stage with George’s cymbals in my back singing our songs to a handful of people. We all miss it terribly. Our shows are fun, and honest, and open to everyone who’s looking for a good time.

Ha, we like to keep it about the music at our shows. We’re not into high-kicks (not that we could do them anyway… without causing injury!) or pyrotechnics. But just because we like to stay focused on stage, doesn’t mean we’ve not seen some s**t in the crowd. You guys are messed up… haha!

As a singer, I’m the worst to ask. I know that the guitarists like to plug their guitars into big boxes that make them big-loud… and I’m pretty sure that George refers to his selection of round tubs as a “kit”, but other than that I’m clueless… Psst, Stevie shouldn’t you plug the label? Oh yeah, Marshall Amps forever!

Well last June we released a sick new album Kiss The Sky [reviewed here – Mosh] [and here – Ross] and thanks to a global pandemic we haven’t been able to tour it… So if you wouldn’t mind checking that bad boy out and giving it a few streams, or if you’re old-school maybe even buy yourself a copy… we’d love you forever. Subtly places link here: https://linktr.ee/BadTouch

We’ve just announced the rescheduling of our “Kiss The Sky Tour” yet again. We are super gutted that this has to have happened, but everyone’s health and well-being is paramount to us. The newly named “Better Late Than Never Tour” is coming Nov/Dec 2021 and all previous tickets remain valid. Between now and then we’ll be working on more material whilst keeping our loved ones safe and doing our bit to get through this ASAP.  Fans can book tickets for our November and December 2021 rescheduled tour from https://badtouchrocks.co.uk/gigs-tours.

We’ve had the chance to play with so many awesome bands, and so many awesome people, both undiscovered and big boys. We’re super looking forward to having our mates Piston open for us on the “Better Late Than Never Tour.” They’re an awesome band, with a huge sound, that will definitely bring their A-game, and make us do similar. As for who we’d like to support? I know we’d all love to open for the giants, Black Stone Cherry. If any of their team is reading this… we’re ready and waiting… message me on Instagram @yeahthatstevie (wink wink).