Spoilers for the end of this one – a rare occurrence where their taking part in their dream line is actually happening! 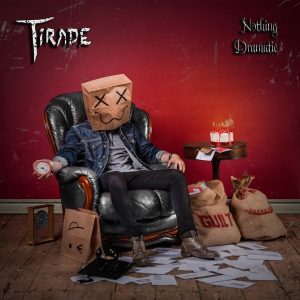 We’re from all over the country – Jake and Josh are from Southampton, Alex is from Chelmsford (Essex) and Ste is from Warrington.

Jake and Josh actually met in college back home but we all met at university while studying various music courses.

Well, the band name actually came from Jake pondering in the shower. He was thinking about what our song topics were about and a lot of them at the time were pretty much angry rants, he just thought “what’s another word for a rant” and Tirade was born! The worst part about the name is that you assume it’s easy to pronounce but we can speak with experience and say, it ain’t that easy – “Please welcome, Triade!”.

Lower Than Atlantis, Don Broco, Enter Shikari, VUKOVI, Press to MECO and Boston Manor are some of the main influences. However, we all have our own varied tastes, ranging from 80s pop & funk to newer alternative rock and metal styles which you’ll hear across our new EP.

We think that our sound is a fresh take on the current curve in alternative rock, as we said earlier, we like to draw influences from many different styles so while we stick to our alternative roots, we can still make our music accessible to those who might not be strictly into “alt rock” as a genre in itself.

Originally we grappled with themes of anger and frustration but as we managed to vent those feelings, we’ve now moved towards more introspective lyricism focusing on our adult life issues since we left university; we are less angry now just more exasperated.

We really wish we could see our own show live so we could answer this question the right way but from our perspective, we like to try and keep a lot of energy in our shows throughout but every now and then we’ll play one of our more “feelsy” tracks so we can share a moment with the crowd. For the most part, they’re pretty sweaty and intense though! As for the amount of shows played, we have lost count at this point but a lot!

We had a show at The Old Hairdressers in Glasgow when we toured with We Are Carnivores where we tried a bit of crowd interaction in the form of everyone rowing an invisible rowboat, something we’d seen before at some of our favourite bands live shows, this was the result!

So Ste uses an SJC drum kit with Zildjian cymbals, he uses Evans drumheads and prefers Vic Firth drumsticks. Josh and Alex use Orange amps and heads primarily although Alex does also have a Blackstar cab, they both have uses Fender guitars for a good while but recently have acquired a Revelation guitar each, anyone who hasn’t heard of Revelation should definitely check them out. Finally, Jake uses Sterling by Musicman basses, and Ampeg amplification – he has also recently invested in a darkglass pedal which is very tasty!

At the moment we are promoting our next EP Nothing Dramatic which will be out on the 30th August; if you can’t wait until then, you can check out our latest single which will feature on this EP “To Be Honest” on Spotify or check out our music video on YouTube.

So we have our EP release at the end of August of course but in the meantime you can catch us on tour with our friends in Donnie Willow at the end of July, we plan to have a few more shows dotted about over July and August as well and will be looking to announce some more stuff later in the year so keep your eyes peeled!

So the funny story with this is that we can actually give you a date and location for this one, we’re supporting Donnie Willow on our tour with them at the Mother’s Ruin in Bristol on the 26th July. Our good friends in Blank Atlas are opening this one up and we can assure you, it’s going to be a big one.