Here’s your daily dosage of new bands to check out. 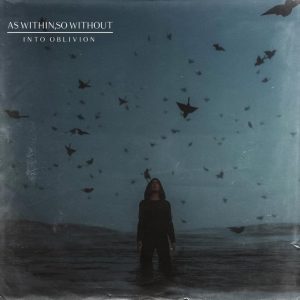 Luke Vitullo: I met our vocalist Mitchell and our bassist Mathew through a mutual friend, Ranfi. Ranfi was the original vocalist of the band when the band first formed and Mitchell played guitar for the band, I joined as the second guitarist but eventually, most of the band members left and the only people left were me and Mitchell, and Mathew. Our guitarist Mike lives in the same town as me, so when the time came where we became serious about this, it only seemed right that he joined us, I then made the switch to drums. For our first real year as a band, playing shows and releasing music we were a four-piece. Right before Anchor dropped we picked up our fifth member, Matt Tzovolos on guitar. We also met him through a mutual friend.

Luke Vitullo: Technically the band has been around since 2014 under a different name. Then our name was eventually changed in 2015 to As Within, So Without. But we didn’t become active in the scene until 2017 when our first single “Earth Mover” came out.

Luke Vitullo: It’s funny because I wasn’t actually in the band when the name was picked, I joined soon after as a replacement to the member who came up with the name. None of the members I think are really exactly sure, we think he just blurted it out. We’re not really sure to be honest!

Luke Vitullo: There are so many influences on all of our members personally. A lot of us have a very diverse music taste, and I feel like our newest album Oblivion really reflects that. The album will be available everywhere March 5th. Even though we’re a metalcore band we try to find originality and pull influence from our favourite aspects of music and not be contained to one style or genre. But bands we are often compared to are In Hearts Wake and Wage War.

Luke Vitullo: I believe what makes us unique is our musical background and I feel it definitely shows in our music and the way we write our songs. It’s definitely more prominent on our new album Into Oblivion which is available everywhere March 5th. All of us have different upbringings musically. Mitchell (vocalist) grew up on pop punk and played in the marching band all throughout his middle school and high school career. I didn’t even get into this subgenre almost until I was playing it. I was more into nu-metal and thrash metal growing up.

Luke Vitullo: I would say yes, but not intentionally. Mitchell uses our music as an outlet for his emotions and a way to communicate with the audience. And the theme that seems to pop up most is that it’s okay to not be okay. No one should have to suffer alone. That is something all of us feel very strongly about.

Luke Vitullo: The best way I can describe it is energetic, heartfelt, interactive, and humble. We try and create an environment where everyone is part of the family and that everyone is accepted under music. Our shows show emotions that you normally wouldn’t see out of us on a daily basis. As far as how many shows we’ve played, I lost track a while ago. But we have been pretty busy since we put our first EP out in 2017!

What kit do you use / guitars do you play /etc.?

What are you plugging/promoting at the moment?

Luke Vitullo: We’re currently promoting the release of our first LP Into Oblivion which will be available everywhere you stream and buy music online March 5th.

Luke Vitullo: Our plans for 2019 are to get out of NY and play places we haven’t been and that is exactly what we have been doing and plan to continue doing. We have a very busy schedule for 2019 and we’re super excited to share our new album with the world.

Luke Vitullo: Wow, this is easy for me. I would love to open for August Burns Red. As far as who would be opening? I’m not too sure. If the rest of the band were here I’d have a much longer answer!

What do each of you like to do on a night off when you aren’t working or playing music?

Luke Vitullo: I personally like some alone time jamming my favourite bands, I know Mathew (bass/vocals) is always playing PUBG. Mike (guitar left) is either always listening to music or playing PlayStation. Matt, well he’s always either at work, with the As Within crew, or with his girlfriend. Mitchell (lead vocals) is always floating around, I never know what he’s got going on!