The noughties were a strange decade, but what can’t be denied is the great music that ruled the charts from 2000 to 2010. Of course, no genre thrived more than Brit-rock, a genre which receives little attention nowadays, but in its heyday, dominated the charts.

If, like myself, you long for the twang of wayward guitars and London accents of Brit-rock, then look no further than today’s Band of the Day, Different People. The Essex quartet have taken the now classic Brit-rock style of the noughties and infused their own hard rock, almost grunge, style producing an entirely different and brilliant sound. 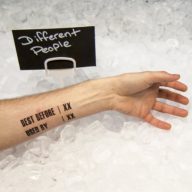 “Best Before/Use By” is what a rock song should be. That’s perhaps the best way I can describe it. The song sounds massive, totally encapsulating, and full of energy, with lead guitarist Lee Sambridge showing off his full range in this one track, playing a solo the likes of which would be at home on a Foo Fighters track. This becomes particularly true when heard in combination with vocalist Matthew Whitta’s rough vocals on the chorus. It’s in the verses where Whitta’s softer vocals let slip the brief hint of a London accent that really sparks the memory of noughties Brit-rock. The only negative I have for “Best Before/Use By” is that it’s over too quickly!

The second track on the single, “Ain’t To Fade”, is an acoustic track, which as you might imagine, takes a far slower and more gentle pace. This is by no means a bad thing, and in fact contrasts with the speed and explosive nature of the previous track, proving that Different People are more than capable of achieving a single, and eventually an album, which is well-rounded and diverse.

Best Before/Use By is released on the 6th of May and will be available to buy here.