A first “proper” live album from Corey Taylor’s other band is about to drop and I’ve spent a fair while listening to it. Twelve years on from the digital-only Live in Moscow, Reno’s equivalent will be released in a variety of formats (get the CD from Amazon and we get a kickback) this week, and it’s a bigger experience than its forebear in pretty much every way. 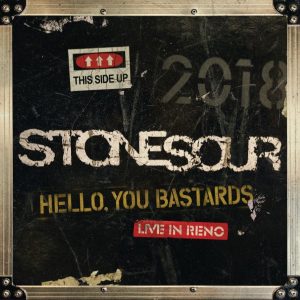 For a start, there are now six studio albums from which to cull the source material including the most recent, Hydrograd, the tour for which was the focus for this release. Seven of the sixteen tracks on there (including intro “YSIF”) are from that album. The recording was made at their October 5th 2018 show at the Grand Sierra Theatre in Reno, Nevada and it sounds like everyone there had a very good time.

For my money, Hydrograd is their best release since Come What(ever) May and it’s nice to see that album still doing well in the setlist with a decent showing of four songs. That album was one of a dozen that I had on repeat on my very small / cheap mp3 player while I did a charity walk across Europe in 2007! As a result, I know it pretty well… Stone Sour’s strength is their mix of real hard rocking tracks and hair-raising ballads, and I’m happy to report that the latter haven’t been skipped in an effort to make them seem more brutal live. Taylor can save that for the next Slipknot live release. Instead we have superb renditions of “Through Glass” and “Bother” backing up crunchers like “30/30-150” and “Absolute Zero”.

It’s a warts n’ all release as well. While the band pretty much nail it throughout, Taylor’s vocals aren’t spot on in places and he’s obviously out of breath (or gets distracted) once or twice. The thing is, this doesn’t detract from the album. It makes it more honest. We know he doesn’t stand still at a mic stand for ninety minutes, he gives it 100% every damn night and if he didn’t skip a handful of lyrics over the show it would actually be a bit odd.

So what we have is a live album that’s well balanced in terms of setlist, well performed by all involved and well produced by the knob-turners and slide-sliders in the studio. The crowd interaction is good, but doesn’t take over the album. Often an issue with live releases is listening to the patter over and over. No such worries here as it’s brief and atmospheric – I do have a feeling given the length of the album overall that this is where edits have been (appropriately) made.

Definitely a good addition to the collection, and it fills the gap since the last studio release which is now over two years ago.

Hello, You Bastards: Live In Reno is out on December 13th