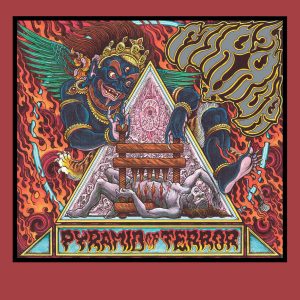 Hails. We are from the island of Cyprus

Most of us have been long-time friends and band mates in other projects and one thing lead to another and here we are.

Mirror was formed in 2015 by our bass player Taz Danazoglou ( ex  Electric Wizard ) but this current line-up was formed in 2018, after the departure of some members. Nikolas ‘Sprits’ and Constantinos joined first and after a while our drummer Danny Conway also joined Mirror.

The name Mirror was inspired from a story by Brian Lumley, the mirror of Nitocris.

Our music is a mixture of NWOBHM with occult themes full of mysticism.

As I have mentioned our lyrical themes are mainly occult and dark themes.

Our live show is bombastic, full of energy that’s being delivered to the audience, grabbing you from the neck and holding you down until it’s all over. We haven’t played too many shows yet, we played 8-10 times in Cyprus with great bands like Rotting Christ, Omen, and Riot V (twice), Sacred Steel a.o and in Greece at Into Battle Festival with Angel Witch, Sortilege and Chevalier. A couple of shows unfortunately were postponed due to Covid-19 but eventually they will happen. One will occur in Cyprus of course and the other one is at Muskelrock Festival in Sweden planned again for 2021 where we were planning to hold a tour in Europe but never happened.

We just give booze to the audience.

Sprits uses an Ibanez Jem, with a Diezel VH4-2 preamp.

Currently we are promoting our second album Pyramid of Terror which goes very well! We got awesome reviews and was nominated as one of the best albums of 2019! Check it out!

The plans for the next 6 months are first of all, all of us and our families to be safe and healthy, a couple of shows and we are currently working on some new material for our forthcoming album and also a split that we are working on with another band.

Iron Maiden or Judas Priest of course. We have a lot of mates in other bands so the second question is difficult!

definitely worth checking out. .