Today we feature a band from a country which can categorically answer that most important of questions: “Should pineapple be allowed on a pizza?”… 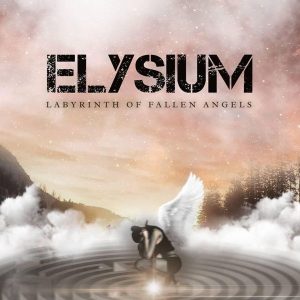 We are from Italy, mostly from Rome and Orvieto.

Playing together and through friends in common.

Elysium was originally formed in Orvieto, Italy, in early 2013 by bassist Marco Monetini, violinist Christian Arlechino, with the involvement of drummer Flavio Lovisa. The core of the group was born out of common artistic interests that we held together with regards to songwriting style, work-ethic philosophy and mutual musical desires. Between 2014 and 2015, we wrote and recorded our debut EP Symphony of a Forest. In 2016 new members joined us: singer Daphne Nisi and guitarist Simone Moratto, who definitely have changed the compositions, giving a more powerful and Rock sound to band along the infusion of soulful vocals. Leading us to our first album, Labyrinth of fallen angels, released in 2019 by Lion Music.

We were fascinated by the meaning of this word, Elysium, which is this place, according to Greek and Roman mythology, where the souls of those who were loved by the gods lived after death. Epic and related to our Mediterranean roots at the same time, perfectly fitting.

The musical idea behind this project is to have a symphonic rock where various influences and musical insertions can coexist in a true and new kind of crossover genre. And that’s why we can hear the 70’s symphonic rock of the Queen, the Caravan, the Camel along with the Vivaldi’s classical influences, a real reference point for the melodies of the violin, tied together with a folk vein typical of Jethro Tull or Eluveitie . Also you can hear influences of bands such as Anathema or Within Temptation especially in the vocal and keyboard parts.

The main goal with making this album was to blend together more musical genres, giving life to a crossover style that is not well identifiable, even though it has a strong rock component combined with a strong pop melody, so that it could be heard by a large audience, even by those who do not usually listen to rock music.

The lyrics are mostly written by the singer and are inspired by Homer’s Odyssey, with particular attention to the figure of Ulysses, who is also found in Dante’s hell: from this reading she started to picture an Ulysses of our times who is facing the various aspects of the odyssey of modern life. Many of the topics dealt with in this incredible story seemed to be in fact extremely actual, proving how this opus, although it is so ancient, remains among the most interesting ever. “Evanescent”.

For example, what the mythological figure of the mermaid represents in the Odyssey, that is the risk of being fooled by appearances and be swallowed forever by the sea, transposed to nowadays seems to be a perfect metaphor of what is happening with the virtual world and the social media, kingdom of appearances that often engulfs all of us at the cost of our own time spent in real life that is becoming every day less than before. “Siren”.

Or the question about cunning, the major trait of Ulysses, which can lead to power, but which can also cause a war if used without the exercise of morals – the reason why Dante decides to place Ulysses in hell – made her think of globalization that is entering the world like a great Trojan horse, conforming to a standard model those that are the characteristics that form the individual identities of populations, the general inattention of the great powers towards the problem of pollution and how they use cunning more for their own economic interests than for the well-being of society, and that therefore, if a powerful collective awakening of the human being does not take place, this Trojan horse will end up unleashing again some great war. “Before the End”.

Maybe we are all a bit Ulysses and we find ourselves day after day living our battles, trying to overcome our hurdles, our “sirens”, illusions, fears and sometimes defeats, each facing his own personal journey in this life. Until one day, looking back, we realize the road we’ve traveled and we finally get to say “Here I am”, and we realize that everything we’ve done has led us to be who we are, for better or for worse, just like Ulysses, we come back home.

Our show at the moment is focused on the musical contents more than other aspects, but we are planning to add more visual inputs for the audience, such as video projections.

We are promoting our first album Labyrinth of Fallen Angels and the two videoclips we produced: “Turnaround”, which is a lyric video and “Before the End”, shot in Dubai for the first single we released. You can find everything on all music platforms and the videos on our channel on YouTube.

We are working on a new EP. We love concept albums and this will be a concept EP, talking about human evolution and other cool stuff like this.

And looking for live concerts, as soon as it will be possible to play live again.

Definitely Evanescence, Within Temptation and Nightwish! In our latest shows we had a band called Aeternum as opening act, great musicians and great friends, too.

[the answer is “no”, by the way – pineapple should never be on a pizza]