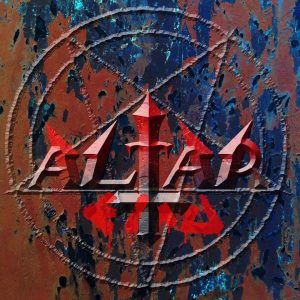 Marcel: In this line-up, for about two years.

Marcel: It’s actually a combination of the old band name (Altar) and the second album Ego Art. We combined the two into AltarEgo.

Janneke: My influences are both Angela Gossow (former Arch Enemy) and Randy Blythe of Lamb of God. What Randy can pull off with his voice is amazing.

Bas: Mainly black metal but I can appreciate all kinds of metal. I also play solo guitar in an old school death metal band named Icons of Brutality. I also find classical music very entertaining, as long as the music is put together in such a manner that I can appreciate it.

Marcel: Everything, from old until the present metal music.

Erwin ‘Bakvet’: My influences lie in the old school death metal such as Morbid Angel, Napalm Death, Bolt Thrower, etc. Drummers such as Pete Sandoval, Gene Hoglan, George Kollias, and a lot of other drummers from these genres inspired me.

Janneke: Instead of making it difficult, let me just say that we make old school death metal. Nowadays, there are too many genres and subgenres of subgenres. I’d suggest you have a listen yourself and decide where we fit.

Janneke: We try to stick close to how Altar started out back in the nineties and that’s to continue with our disapproval of any kind of religion and its fanatics. ‘Unfinished Business’ especially focuses on the Catholic church and how they are doing anything they can in their power to keep the sexual abuse as quiet as possible.

Janneke: Our live shows are full of energy and fun. Honestly, I have lost count on how many shows we’ve played and I’d rather think of all the shows that we will be playing.

Janneke: The wildest thing I’ve seen was at a show of Lamb of God in De Melkweg, the Netherlands. Some dude who was standing at the front centre of the stage apparently beat this girl. Randy noticed and stopped the band from playing and called him out. Truly epic.

Martin: Nothing wild or anything, but when I bought my first metal album, which was Altar’s Ego Art, I would have never thought that 20 years later, I’d be sharing a stage with the dude who wrote it.

Bas: It was so wild, I can’t remember.

Janneke: I use a wireless Shure microphone, Beta58A, and a Sennheiser in-ear system. Naturally, I use matching Shure headphones ;)

Janneke & Marcel: We are currently promoting the hell out of our recently released EP entitled The Exorcism of Jesus Christ. You can have a listen on our YouTube channel or find it on Spotify or iTunes.

Martin: Indeed, and also working on some shirt-designs to they will be available in about a month or so, so keep an eye out on our Facebook page or website (http://altarofficial.nl/)

Janneke: We plan on doing as many shows as we can, promoting the EP, as well as finding a suitable record label and then release a full-length album.

Marcel: A good record deal, getting more recognition abroad, and playing as many shows we can get.

Janneke: I’d love to be supporting Rotting Christ, Immolation, Venom Inc., Vader or Nervosa of course! One band I’d love to open for us would be Illusionless but unfortunately those guys called it quits a few years ago. I’m still hoping that they’ll pick up their instruments again. I would also love for Hecate Enthroned from the UK to join us on tour.