Keeping the theme of “something different” for our Band of the Day, we’ve got an interesting one for you today… 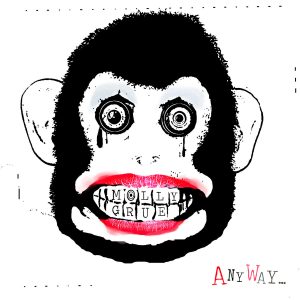 I’m not really a band- I’m a singer-songwriter that hires session musicians, but I’ve been recording off and on, since the 90s, under the name Krista D. Molly Grue is a new side project that I created to release the soft rock music from my songwriting catalogue.

Where does the band name come from?

Molly Grue is a character from the book The Last Unicorn by Peter S. Beagle.

The influence for this project is mainly just tragic events and the desire to vent about them. The project is more about catharsis than marketability.

That’s tricky, because I don’t really know if there’s anything specifically unique about the project. I mean, there’s really nothing special about being a female fronted, 90s-ish sounding, soft rock project. It might stick out as unique because I’m usually off-trend with my releases, meaning I’m still stuck in the past somewhere, sound-wise. Maybe that’s potentially the only thing that will catch people’s ear… I’m doing entirely what I want because I barely know, or care, about what’s going on in the current music market and that’s usually pretty obvious when you listen to the tracks.

Most are personal and centred on mental illness and abusive situations.

Hundreds as Krista D but only one, so far, as Molly Grue. I performed at the opening reception of one of my solo art shows; I’m primarily a visual artist.

What guitars do you play?

An old Norman acoustic guitar that I’ve had since I was a kid.

To try to release the Molly Grue EP… I’m so behind. I had an opportunity for an artist residency come up, right on the heels of a solo sculpture show and I’ve not had time to get into the studio. Basically, I like to stay busy and need to expend a lot of creative energy because it’s essential for my mental health, so I’m always juggling several projects; six projects, to be exact. The only thing is, I don’t ever plan for success, so when one thing surprises me and starts going well it inevitably trips up the momentum of the other projects. So the main 2018 plan is to find time to get back into the studio. I’ve digitally released the single “Anyway” for the time being.

[…] from The Last Unicorn(one of my favorite all time films, by the way), Molly Grue is Acheson’s side project in which many of her soft rock songs are released under. The decision to pursue this project came after a hiatus with her music-making, where she had been […]