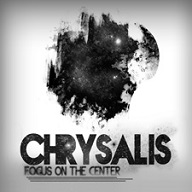 Chrysalis formed in 2003, released their self-titled debut album in 2006 and then… well, they just seemed to focus on live shows for seven years or so. However, they’ve resurfaced with a new release, Focus on the Center, due out on May 12th in the UK and Europe.

Their sound could define the term eclectic. While having some elements of post-metal and post-hardcore int heir sound, they’ve got an overall more general alternative feel which softens the “post” edges a little. They’re more melodic than most post-hardcore bands I’ve heard which makes their sound that bit easier on the ears.

Heavy rhythms bleed into slow, clean instrumental sections and mad-moustachio’d lead singer Yessi has a vocal range that covers both very well indeed. Bouncy, heart-wrenching, angry… all emotions obvious in the lyrics and delivery of the bands songs and sometimes all within the one piece of music!

It’s not often you get a new sound these days, and Chrysalis aren’t far from it with this crazy mixture that somehow seems to blend rather than clash.