Life Against Time have been on our radar since early last year when we featured them as Band of the Day. Later on we caught up with them again when they dropped a new video. Well, they’re back. Another new song, another new video… and this time Principal songwriter Lee McLaughlin explained how it came about: 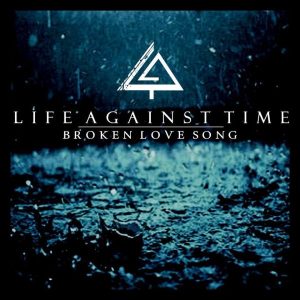 When I enter into an idea it’s not usually with a specific thought in mind, it’s a very natural process. Once I have a rough idea of the intro, verse and chorus, I then introduce that to the band with everything flowing from that point.

We finish 90% of the music without adding lyrics. This way we can make the music as exciting as it can be on its own, with vocal melodies and hooks being the icing on the cake. “Broken Love Song” was written in this way and is pretty much a showcase of what Life Against Time are about; the contrast between the delicate atmospheric clean sections into the heavy, bouncy riffs and overdriven vocals. It has a classic yet modern feel to it that is a signature formula for us.

As for the meaning behind the lyrics, I don’t like to make things too obvious and prefer to leave the listener to interpret how they relate to them personally.

As for the process in completing the video, Life Against Time employed the services of graphic designer Callum Stokes. We wanted to do something different from a live performance or structured and acted video so fellow guitarist and songwriter Chris Bailey worked closely with Callum on producing a spacious, airy and atmospheric lyric video.

It started with this idea of space and scenery. The ambience we created in the track lends itself extremely well to the reflective feeling throughout the video. The echo and reverb from both mine and Lee’s guitar sound gives a feeling which is both distant yet comforting. Having a lyric style video adds to the sense of mystery by removing the visual aspect of the band, making it much more about the music. We wanted the weather on the video to get gradually worse as the music kicks up into gear.

Callum did an amazing job and he and myself spent a few long nights orchestrating the content into the video you see now. We’re really pleased with the results.