Ukrainian black metal horde Balfor, have just this moment released a music video for “Serpents Of The Black Sun”. The video was produced by the Utgard Production and directed by Anders Matt Kochin. 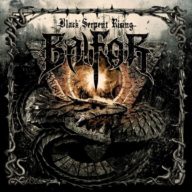 The track is taken from the band’s upcoming third album entitled Black Serpent Rising, to be released on January 15th worldwide via Drakkar Productions. The album was recorded at More Music Studio in Kyiv, Ukraine. Mixed and mastered at Blacklight Studio by Shaddar (Khors, Ulvegr, etc.). The cover artwork was created by a talented Ukrainian artist Nugeslag, who was the talent and mastermind behind the cover artwork on the latest Rotting Christ albums.

The band recently announced their first summer festival date at the Dark Troll Festival, Germany, which will take place from May 24th – 26th, 2016. Additional details on the festival are available here (/).