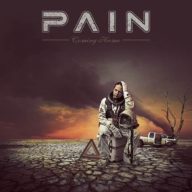 Pain started life as a hobby for Peter Tägtgren, whose concept was to fuse heavy metal with 1980s-inspired electro-industrial and techno influences. It all began with the release of a self-titled debut in 1997, and since then Pain have released six more albums and a DVD. Coming Home will be the eighth studio album release.

After the substantial success of Peter Tägtgren’s Lindemann project with Rammestein vocalist Till Lindemann, Peter retreated – taking some time to write another shrewd industrial metal statement which is due out on September 9th. Check out what he has to say in the video below.