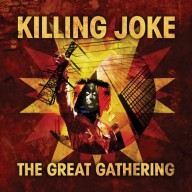 The legendary Killing Joke are delighting their army of followers by announcing a special show at London O2 Academy Brixton on Friday 4th November.

Jaz Coleman, Geordie Walker, Youth and Paul Ferguson, will be returning to London on a high following a hugely successful sell-out tour at the end of 2015 and their critically-acclaimed album, Pylon, given the honour of Album of the Year from Vive Le Rock magazine and featuring in many other top 10’s from Rolling Stone to Metal Hammer . Their fifteenth studio album release also peaked inside the UK Top 20 charts topping off an exhilarating year.

With a legacy spanning nearly 40 years, the true greats of post-punk and industrial rock had already marked their long history with the 2013 releases of The Singles Collection 1979-2012 as well as a career-spanning film, The Death And Resurrection Show.

Tickets on sale Friday 1st April at 10am  from www.myticket.co.uk / www.seetickets.com