After a whirlwind two years since their reunion in November 2017, signing to Nuclear Blast a year later, and bringing out a killer new album (Mourn the Southern Skies) a few weeks ago, cult NOLA groove-thrash heroes Exhorder have finally arrived in Scotland. Having slayed plenty of stages since their return, it’s fair to say the ragers in Audio have a thrashing treat ahead of them. 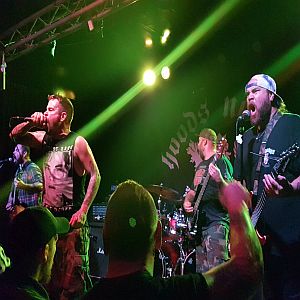 Opening the show are local lads Kingpin whose intense brand of crossover thrash always gets a Glasgow crowd fired up. The band put on an energetic performance with frontman Lev’s throat-shredding barks and guttural growls sounding insanely angry. Drummer Den also well and truly pounds the kit to death, with rapid fills in between the banging beats. There’s lots of crushing breakdowns and breakneck hardcore thrash in songs like “Ignorant”, “Shiver”, “The Vulture’s Circle” and “Chains”. There’s plenty of nodding heads and cheers between songs, with a closing chant of “CST!” representing the Central Scotland Thrash collective, leaving the crowd warmed up for the rest of the gig.

Next up is California hardcore bruisers Hoods, continuing the crushing punk-fuelled riffs. The band perform well, upping the energy in the room with more headbangers throughout. There’s raging hardcore dancing in the pit as the band slam through heavy breakdowns, stomping riffs, and punk outbursts in tunes like “Ghetto Blaster”, “Night Rider” and “The King is Dead”. The band look like they’re enjoying the noise, especially frontman Mike Hood with his chatty banter between songs and mic swinging onstage. The set ends with a duo of an Agnostic Front cover, “Friend or Foe” and “Don’t Fight, Let’s Party Tonight” with Hood sticking the mic out to the moshing Kingpin boys down the front. Audio is more packed now and after the two supports, anticipation is building for the headliners.

It’s time. As some funky James Brown fills the room, Exhorder casually walk onstage and the crowd roars. From the first note of “Homicide”, the energy is insane. The mosh begins and remains relentless throughout the set as the band nail those heavy riffs. The set is primarily composed of classics from debut, Slaughter in the Vatican, with a few bangers from the new album, and sophomore, The Law. The mental mosh continues until “Legions of Death”, invoking an array of stagedivers to sail across the pit for the rest of the gig.

The band are on fire onstage, crushing every riff and smashing every beat. It’s obvious the band are living as frontman Kyle Thomas rocks out between roars and guitarist Vinnie La Bella’s face beams in every song. There isn’t a bad performance in the set with new classics-to-be “My Time” and “Hallowed Sound” resonating with the ragers just as hard as the band’s namesake song or “Death in Vain”. No Exhorder show is complete without ending on killer hit “Desecrator”, resulting in a final thrashing frenzy on the Audio floor when the slow burn chugging builds to it’s pounding conclusion.

Exhorder definitely leave an impression on Glasgow with their flawless performance, humble demeanor and good-time vibes. With an awesome new album and on-point live performances, the band are on top form. If Exhorder are playing a show near you in the future, you will not be disappointed – if you’re not a fan already, check them out!