Drawn in by the exotic line up (half from Australia, half from USA) and extensive European tour, I decided it was time to check out another band at my local rock bar. Enter stage left Dellacoma.

Singer Dellacoma Rio kindly sent me a link to their debut album in advance of the show so I was able to get familiar with some tunes in advance. Their debut album South of Everything has been out for a couple of years in the US but was only released in Europe last year. It’s a solid collection of tracks blending southern rock n’ roll with elements of classic, blues and mainstream rock and immediately bringing to mind The Black Crowes, Aerosmith, Rolling Stones and Zeppelin. That’s an attractive enough prospect to tempt me out on a stormy Wednesday night.

I met the band in the bar for an interview prior to the show, but managed to arrive just as their dinner did, so left them to shovel down some pizza (vital stage fuel) before we headed outside for a chat (interview to follow on Moshville Times). It was great to get to know everyone and get to grips with their complicated logistics. I needed to know how two guys from Australia ended up in a band with two guys from Texas.

We settled back into the venue which was steadily filling, better than the last time I was here. All of a sudden heavy guitars exploded into action and the band took command of the stage. They were tight, had a great energy and were well received by the local crowd. Dellacoma’s vocals were engaging and earnest from the first word. Flanked by Rick Reynolds’ deep yet melodic bass and Art Struck’s intricate and bluesy guitar and backed up by Matt Cook’s steadfast drumming – this is an impressive live quartet. 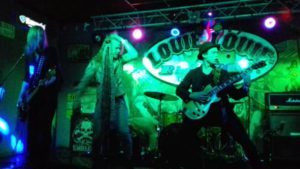 Now, the stage in Louie Louie is small, so it’s pretty hard to bounce about and add high-energy action to the performance, however, this suited guitarist Art’s playing stance. Transfixed lovingly to his guitar – we were in turn transfixed to his style of playing. Dellacoma jumped down into the crowd a few times and enjoyed some interaction with the locals, which was good to see. Ah the joys of cordless mics these days.

Having played the album a lot in the days leading up to the gig it made it more fun to head bob to the already familiar favourites “Bloodsucker”, “Movin’ on to Something New” and the Aerosmith-esque “Walk the Plank”. The only downside was not getting an encore, despite the request being shouted from a few people in the engaged and impressed crowd. Any disappointment was soon overcome though when my friend and I had the sincere pleasure of chatting to the band at the bar for the next couple of hours. What an interesting and talented bunch of hard-working musicians who deserve to do very well indeed.

Dellacoma continue to tour in Spain, Germany, Belgium and The Netherlands before returning to the UK to play one last European show (1st April at The Greyhound, Beeston, Nottingham).

You can buy South of Everything via iTunes and look out for the new album coming later in the year.