This review is Part of series of articles on London By Norse. The various articles will be linked at the bottom of each page once they have been uploaded.

Now this was one of the nights I was most looking forward to. With two of my favourite Enslaved albums being Ruun and Below The Lights, I was really looking forward to hearing some of those tracks alongside tracks from Isa and the other albums of the middle period.

First up on the stage were Norse metallers Helheim. Having a kind of black metal style sound, similar to Enslaved early material, the band immediatly set about showing folk what they were all about. Fast riffs, harsh vocals, blast beats galore, they were almost a trve kvlt black metal band aside from the corpse paint. Playing a set compromised of songs from across their back catalogue along with a new track, they delivered a very good set and I’m pretty sure they gained a few new fans that night. Sadly, the didn’t do it for me but there’s no denying that they are a very good band. (7/10)

It was then time for the birthday boys to once again take to the stage, this time in the slightly smaller underworld. Opening with one of my all time favourite tracks, “Path To Vanir”, the band exploded onto stage and immediatly fired up the crowd. Having a more intimate feel than the previous night really added to their performance and made it feel as though the band and crowd were one. Like the previous night, there was a bit of banter with the crowd, however there was a lot more this time. However, as always, it’s rather funny and it shows that the band have a good sense of humour.

As the band kept on churning out the classics such as: “Ruun” and “Return to Yggdrasil”, there was a moment when something rather interesting happened. One of Ice Dales’ strap locks for his guitar came off. I saw it fling off and it landed right in my hands. After the band finished playing the song, myself and a few other members of the crowd signalled to him and I pointed out the strap lock. He immediately recognised it and graciously thanked me for returning it. His guitar was then safe and he was ready to continue!

Playing a set compromised of classics such as: “Havenless” which was performed for the second time ever and “The Crossing”, the band delivered a superb set that unfortunately had to be cut short. This was due to the strict 10pm curfew at the venue and as a result we missed out on two rather special songs. Despite this, they delivered a superb show and left me wanting even more! (11/10) 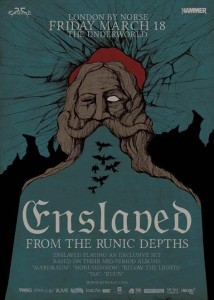 All photos aside from header image courtesy of Katie Frost Photography.

London By Norse: Interview with Grutle Kjellson of Enslaved | The Moshville Times