Here we are at Ivory Blacks for a night of Rock/Metal in the form of Blaze Bayley but before we get onto Blaze we have two other bands to get through.

First up hailing from Greenock are a previous band of the day at Moshville, Damaj, a great young band who get better every time I see them and tonight is no exception. The new-ish drummer Scott has settled in well with the boys, David on bass has come into his own and was up front several times tonight, nothing worse than a bassist who just stands there. There were a number of trading licks, solos between James and Daniel which was nice to see, these two have really grown as guitarists with James in particular a very natural player. 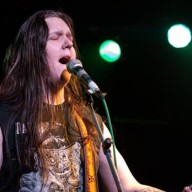 The band kick off with the excellent “Testament of Judas”, before “The Wrath of the Tide” washes over us; a favourite of mine tonight thanks in no small part to James on guitar, fantastic. We have “The Contract” next has Daniel and Scott trading off before they launch off in the track properly, there are some fantastic hook riffs in this track and the twin guitar section of the track is tremendous with David booming out on bass, rifftastic. “The Well of Souls Awaits” us next, another tremendous track with the boys looking happy and relaxed and it shows in their playing, very tight tonight, so we end a tight, excellent short set with “Drink or Die” and a few here tonight did just that. I have said it before, go out and catch this excellent band live, you will not be disappointed.

Next up were Glasgow band FNL who I had never heard of and probably won’t again. I try not to be negative in reviews and so I’ll just say they did not fit the bill with their in off the street style punk attitude, I love punk (UK & US styles) and maybe they guys just had an off night as it took me a bit to realise they were covering Crazy Horses at one point. Sorry guys you just did not move my decibel meter tonight.

So onto the main event with a man I first saw in the 80’s with the awesome Wolfsbane, later with Iron Maiden, then solo, then Wolfsbane, then solo etc etc. I have been a huge fan of Blaze for a very long time, a fantastic frontman, great writer and all round nutter on stage. A monumental two hour set followed, delving into all of the above bands and the upcoming new Blaze album Infinite Entanglement (part of a trilogy) and what a night we had. We kick off proceedings with the excellent “A Thousand Years” from the forthcoming new album which bodes well indeed before we head way back for “The Brave” from the excellent Silicon Messiah. 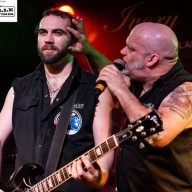 We dip into Maiden territory next with the fantastic “Futureal” from Virtual XI; one of my favourites from his time with them a stomptastic romp of a track, “Human” from IE up next and you wonder where he keeps coming up with all the excellent material, looking forward to getting IE when it comes out. We head to the Tenth Dimension to “Kill and Destroy” before we head into a “Hollow Head” from Blood & Belief; the man and the band never let up, Blaze in particular is holding court tonight and he can do no wrong. We feel the “Solar Wind” from IE next before we end up “Watching the Night Sky” from Promise and Terror with its killer title hook, the intense “Robot” hits us next from The Man Who Would Not Die, again the killer sing along title which he is so good at doing.

The guitar intro trickles in as the title track from Silicon Messiah kicks in. These tracks never seem to age, Blaze has one of those voices that is always recognised and if anything it keeps getting better and stronger as he ages. We stick with Silicon… as we confront the “Ghost in the Machine” and “Identity” pure riffage fun before he is “Calling You Home” from IE. He sings another from Silicon… as he makes us “Stare at the Sun” next; a fantastic track of changing paces which is kind of his trademark in a lot of his tracks. I’m starting to lose my voice now with all the sing alongs, next up to end the main set from Maiden we catch a rare glimpse of “Virus”, one of those rare tracks not to be found on an album but single only, a pure joy to hear tonight, cheers Blaze.

The first encore tonight is that magnificently mental Wolfsbane track “Manhunt” from ’89’s Live Fast, Die Fast with its mental sing along; tremendous. We head to Maiden with the excellent “Man On The Edge” from The X Factor a hook-laden rifftastic blast from the past with Blaze and the crowd in full vocal flow, the air was charged in Ivory Blacks tonight.

We continue the theme with a raucous version of “Fear of the Dark”. We end the night with intense title track from The Man Who Would Not Die and we have to hope we have a lot more years out of one of the UK’s premier vocalists. As I mentioned at the beginning, a two hour show that would put a lot of bands to shame, a truly fantastic night of awesome metal with a man who rules the stage with a presence few singers/frontmen will ever have and a killer band behind him.

All photos by Gary Cooper. More in the full Flickr set.

View all posts by Gary