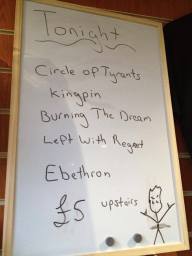 Hey guys, Sean here again after ages of silence – uni coursework, my uni work placement and my part-time job keeps consuming my time for Moshville Times work. However in about a month’s time I will be finished at uni and free from the stresses of education for a year to go out and hopefully gain some experience working in the events tech circuit and the music scene. The freedom from uni will give me enough time to start contributing more to the Moshville Times until such time I decide I might want to go back to uni and complete an honours year. [Someone hire this guy. He really knows his shit – Mosh]

Anyway that’s enough about me so on with the review!

About two weeks ago a uni mate of mine informed me of a gig that a uni mate of his was putting on, full of up-and-coming local metal talent to launch the opening of his new small venue (sister to the guy’s recording studio, Shadow Sound, just out of town) – Shadow Central, situated on Commerce Street in the city’s Tradeston area under one of the arches built into Glasgow Central train station’s big railway bridge. So as poor students looking for a decent heavy metal night out (which Glasgow is lacking in my opinion – Cathouse I’m looking at you!), with the added bonus of a networking opportunity (as student sound engineers and musicians in a newly formed band), we thought we’d check it out.

There were two main showcases of the gig – the venue and Circle of Tyrants. Music first, and venue information towards the end…

The running order ran as follows:

Now you will have noticed that the last two bands aren’t in the title. We didn’t stick around to see Ebethron and Left With Regret and as such a review won’t be conducted for them.

Unfortunately we arrived a little late and only caught Circle of Tyrants’ last two songs. However they proved to be a great straight-up thrash act with some raging material and roaring vocals. Unfortunately they didn’t have much of a stage presence but I think this is most likely due to the size of the stage just about being able to fit all 5 members – they were packed on there fairly tightly, like a tin of sardines which in turn left little room for movement. It’s a shame we missed most of the band’s set as, being a thrasher, I was really looking forward to seeing Circle of Tyrants. I will have to catch them again sometime in the future and give them a proper review.

Next up was Burning the Dream who provided a much more varied sound encompassing ideas from more modern metalcore-type sounds, death metal idea, slower parts and some progressive touches in places. Overall they provided a very heavy and energetic performance with some interesting ideas.

Generally this kind of music isn’t entirely my sort of thing and I wouldn’t buy it but in the flesh they are a great live act. The vocalist (for some reason he reminded me of a wee Scottish Randy Blythe) commanded the stage like a man possessed and had fun doing it, jokingly referring to not knowing the set and throwing out comebacks to his mates’ joking heckles from the stage barrier. The only issue with their live performance in my opinion echoes that of Circle of Tyrants – the stage proved to be too small for the 5 members resulting in little space for them to move around.

Finally, Kingpin was the last band we saw [they were a New Band of the Day back in January – Mosh]. In my opinion they were definitely the best live act with their fast and furious thrashing hardcore crossover. Each song provided an aggressive frenetic energy which, if the crowd knew all the songs, would definitely be mosh pit-inducing thrash-fests. The band consisted of 4 members so with one man less than Circle of Tyrants and Burning the Dream, they could make more use of the rather pokey stage resulting in a much better live presence. The set ended with a collaboration with vocalist from Burning the Dream on a cover of Pantera’s “Fucking Hostile” which proved to be a winner with a few of us in the crowd shouting along with the words and banging our heads within an inch of them falling off our necks.

Kingpin are definitely a band to look out for and great live act, definitely worth seeing again in the future. I hope to start seeing them in the rock/punk/metal press and on small-stage festival slots real soon.

And finally, a bit about the venue. First of all, as a new venue it’s clear that Shadow Central is still a work in progress. Some areas could do with as little as a lick of paint and other areas, from what I saw, could do with a little building work (though these were just glimpses into the backstage areas when walking along the main walkway). You enter to a reception area where the walls are adorned with upcoming gig flyers and old band promo posters. In addition to this there are also some guitar accessories for sale and the venue’s only toilet (it’d be recommended to include another toilet area to have a separate ladies’ and gents’ when the venue picks up trade).

The backstage area is also visible beside the toilet with it’s door under the stairs which give access to the stage area. You climb up the stairs behind the reception to the main elevated walkway which spans the length of the venue. Besides a few closed off storage areas, the walkway is rather sparse and could maybe do with something like a few tables and chairs or a possible merchandise stands – there’s a large amount of space and it’d be a shame to waste it.

At the far end of the walkway beside the stairs down to the stage lies the lighting desk and in the space under this area lies a closed off area where the mixing desk lives, as well as access tot he backstage area and the fire exit. The stage itself is very small, about a foot above the ground, and proves to be a tight squeeze for any band consisting of more than 4 members (as highlighted by Circle of Tyrants and Burning the Dream). The crowd area again is very small with an estimated capacity of about 100 punters, though for up-and-coming bands this size is adequate in my opinion.

Sound-wise, the venue doesn’t need much in terms of a PA and outboard gear. The venue is small enough that the sound of the instruments within the room’s acoustic is of an adequate loudness level and only vocals and keyboards are absolutely necessary to go through the PA (a little bit of kick might be desired to go through the system for a little bit of a low end EQ boost to beef up it’s natural high-mid punch). However in instances where the venue is nearer it’s full capacity, a very small level boost may be required on the guitars so that they are not overpowered by the crowd noise.

Acoustically, the main bulk of the venue, especially the performance area, is lined with a corrugated metal (either iron, steel or aluminium, I can’t really tell) and the floor is of a hard stone material (though I’m not sure of this as I didn’t pay too much attention to the floor). Aesthetically these materials make the venue look a bit like the inside of a giant Anderson Shelter which is really cool however, acoustically I would say this is not ideal.

The hard, reflective surfaces on all sides in such a small area would create a wild reverb to control which could result in the sound becoming mushy. However, the ridges in the metal allows for the breakup of unwanted standing waves (these effectively double the amplitude of the sound by reflecting back on each other from parallel surfaces) which result in an unrealistic representation of the sound onstage and therefore affect the mix. There is also a thick material of some kind covering the areas at the back and side of the stage which allow for the absorption of some of the reflected sound effectively deadening the room slightly (though the materials overall are still overly reflective).

However with very loud metal in my ears and a fair few units of alcohol in my system, I couldn’t judge the acoustics well (especially as acoustics aren’t my strongest point). It’d be best to test the acoustics at a time when there isn’t a gig on however, there might well be acoustic treatments in the venue I’m not aware of and I’m sure that as a sound engineer, the owner of Shadow Central will have implemented whatever acoustic treatments he felt necessary within his budget.