When we spoke to Wayward Sons’ Toby Jepson a couple of years ago, their second album was all new and shiny and the intention was to release a follow-up as close to a year later as possible. Unfortunately, global events conspired against them and now, two years on, almost to the date, we have Wayward Sons’ third album, Even Up the Score. 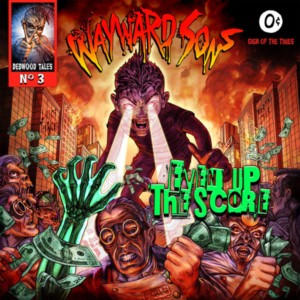 Admittedly, this one took a little time to bury itself under my skin and after an initial listen, there wasn’t worry – because the previous two albums did the same. And I’m a stickler for tradition. But once it bared its secrets, the Sons’ latest effort stands shoulder-to-shoulder with its predecessors and features some of Jepson’s best songwriting to date (which isn’t an easy feat). He continues to hold the trappings of modernity to account in a more pointed and direct fashion pinned against high-octane bouncy rock, pulling largely from classic rock benchmarks without leaning into the current derivative sound we find ourselves in.

The band have stood apart as sounding like only they can and it’s no different for this album as they pull in hints of British Invasion tones, Britrock and grungy, moody moments whilst tying it together with the polish of modernity and pop hooks to ensure the songs are rattling around your brain for days after. Once again, this is the band in a new flavour but continuing to stay true to themselves. They’ve traded in the complexity of the predecessor for a more driving and stripped-back and raw sound with a new hint of punk’s trademark sneer and punchiness and every bit as bombastic as the previous albums. Jepson’s vocals have an extra layer of cynicism baked into the delivery as he attacks his lines with even more urgency and aggression on “Even Up the Score”, a method he returns to multiple times on the album.

Most the album runs at a breakneck pace as if the band want to get to the end as quick as possible, their songs spilling out of them like a flow of consciousness. Indeed, the first three songs of the title track, “Big Day” and “Sign of the Times” barely allow you to catch your breath. Even the softer numbers of “Bloody Typical” with its pop sheen and “Faith in Fools” with its blend of imploring to scrutinise everything you read and hear yet serves as warning for those who don’t keep the pace at a heavy jog among most of the flat-out sprinting.

Meanwhile, “Tip of My Tongue” and “Looking For a Reason” have the hefty bulk of the debut with their frantic drumming tied around chunky riffs yet keep their own identity. We’ve hit the point where Wayward Sons can homage and tie back to past efforts whilst continuing to look forward. However, the high point of the album comes in “Land of the Blind”, continuing the Ghosts of Yet to Come homage. There’s a stroke of genius running throughout this song – it’s one of the tightest and leanest sonically against it being the longest track on the album and the only one to cross the four-minute threshold.

In recent years, the idea of the “difficult second album” has waned, largely in part to the way the music industry has evolved and has migrated to the tricky third album. However, Wayward Sons have looked it in the eye and gracefully side-stepped it with ease in Even Up the Score. Continuing the path they’ve already trod without repeating themselves, the blend of classic and modern rock combined with nods to their own musical history makes this the most Wayward Sons album to date as if this is everything they’ve been building to has finally paid off.

Even Up the Score is released on 8th October

Check out all the bands we review in 2021 on our Spotify and YouTube playlists!