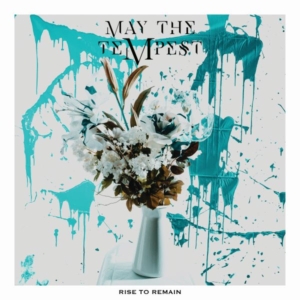 Another album sent in direct from the band, this one via “shouter” Lucci who fronts Munich metalcore act May The Tempest. We always try to focus where we can on the underground and unsigned, as our mission statement says, so I plucked this from our teetering review pile.

May The Tempest’s first release was in 2015, an EP, and since early 2020 they’ve been dropping singles in preparation for the release of the first full album, Rise To Remain which will be available to you all from March 19th. In the times between they’ve played quite a few gigs including some impressive opening slots for bands like Miss May I and Annisokay.

All of this experience has served them well if Rise To Remain is anything to go by. It’s definitely not the sort of thing your granny is likely to have on her favourites list, though the band manage to mix the mainly load, screamy metalcore with the occasional melodic and melancholic moment (“Different” is a prime example early in the album).

This is what you expect from a modern metalcore act, and they do it well. The album’s theme covers “the moral abyss of a relationship, its end, and its aftermath” so, again, par for the course with this particular genre. Introspection, and most often a fairly downbeat version of it, is hardly new ground for metalcore but complaining about that would be like saying there are too many mentions of Hell and Satan in black metal; it’s part and parcel.

What I have to say is that by the time I was five tracks in (“Vacant”, one of the many highlights) I was sold. “Monotony” certainly doesn’t live up to its name, “Clouds” aptly breezes past but scours your face as it does do (check out the video below) and “Unspoken Agreement” breaks the rule of single-word titles, tagged on at the end. It seems that this could be a bonus track, as the rest of the album is book-ended by “Unity” and “Endure” which are shorter, predominantly instruments tracks.

While May The Tempest don’t really add anything new to metalcore, bring in an out-of-genre twist or anything, this isn’t an issue. What they do, they do very well indeed. There are foot stomping, head banging, moshpit inducing segments. There are airy, goosebump raising pauses. There are breakdowns that will open chasms in the floor. And isn’t that what we’re after?

Rise To Remain is out on March 19th

Check out all the bands we review in 2021 on our Spotify and YouTube playlists!