The listening of this new album started when the premiere of a song, “Route to Andromeda” was unveiled earlier last month. I was instantly struck by the absence of Athamas‘ singing. A sneak peak of the vocals featuring solely the composer, Astaroth, had previously been published on the facebook page but I was not expecting it to be 100% him. 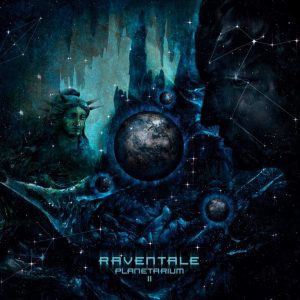 As it turns out, the creator decided to continue the project on his own, making this the most disappointing musical event of the year to me. They were amongst the best acts I had seen live and I’m glad I lived to witness it. It’s a complete waste, shit happens.

Although this review is definitely not starting well, I still decided to pick the album up. Because at no moment I have considered the essence of the project’s identity would be questioned. I knew the compositions were going to be good. The extract hinted it, the full listening proved it.

If we observe it as the continuation of the first act, Planetarium, it feels much more contemplative and distorted, and the singing contributes a lot to it. It is less straightforward. It is no longer about delivering powerful and impacting airs, there is not such a presence anymore. Even if Morphine Dead Gardens, this beautiful unpredicted gem, holds a special status within the project’s discography, I feel there might still be some leftovers in the approach and eerie melodies of the keyboards here and there.

In the end, Planetarium II and its comparative path from its predecessor is just like its artwork. There are a lot more elements and despite the apparent harmony of it all, it looks overloaded. It is perfect for the one who wishes to wander indefinitely, but less for the one who wants to know where to stand.

Planetarium II is out on September 8th on Ashen Dominion.

View all posts by Eduinaluca

[…] English version of the review: The Moshville Times […]