CHRISTWVRKS have forged an unholy alliance with label Apocalyptic Witchcraft and strip away preconceptions with upcoming release Messiah Complex. 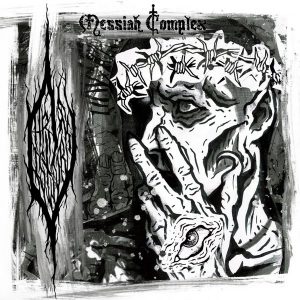 This particular cacophony begins with “Three Daggers I Have For You” and for anybody not familiar with CHRISTWVRKS, Mr. Christ provides a harsh beginning lesson with Crowley-esque soundscapes overlapping disturbing brutality mixed which feels like an 80’s horror soundtrack. This overlaps into “Chaos in My Head” which feels like a perfect continuation. With something as uncompromising as this release I knew I would certainly discover something that really resonated with me, this came in the form of “Dragged Back to Life” which also features samples from a documentary on the Jonestown Massacre.

If there was ever a track that should’ve been added on to the Neon Demon soundtrack it would be the chaotic and brutal “Fuck My Life”. Included are the spoken parts that have been part of the album so far and, as with previous tracks, they are suitably ominous. This evolves into “The Black Swan” which has some beautiful female harmonies but that familiar sense of dread overtakes once again.

Title track “Messiah Complex” feels like a drill penetrating your skull. Vicious and unrelenting, it’s not happy until a good part of brain matter has been taken from you. A savage 30-second reminder in the form of “The Band Is Dead” wants to really make sure the previous track has done what it set out to do.

Penultimate track “A New Corpse” starts off with a mixture of spoken parts. Every time I listen to it I always seem to focus on a different one. Before you really have any time to process the sounds a bewitching melody makes you drift off and, in a strange way, when the brutality comes you almost welcome it…

Finally, “Rebirth” is largely a piano-laden piece with again some hypnotic soundscapes which ends this particular experience – after which I feel I need to go and immediately hug my loved ones. CHRISTWVRKS comments on the alliance with Apocalyptic Witchcraft:

It almost seemed impossible to find a label that would understand what CHRISTWVRKS is all about. Not just an act playing shows but an always changing and shifting art form, art rooted in extreme music, sadness, and depravity.

But Apocalyptic Witchcraft simply get it and I physically fist-pumped the air like in a bad 80s movie when they showed interest in releasing my art after I sent demos to a number of labels I would have liked to work with.

It’s safe to say that Messiah Complex should come with its own health warning as the soundscape is addictively devastating. A grotesque amalgamation of unique-sounding terror.

Messiah Complex will be released on August 7th

I’m a married father of 2 humans, a rescue cat and a royal python. Not nearly enough tattoos or piercings, enjoys reading, Marmite and lots of coffee. View all posts by Rick