After a decade in the shadows, Devon’s Amherawdr uncoil and unearth previously unreleased album Adorned With The Figures of Snakes. 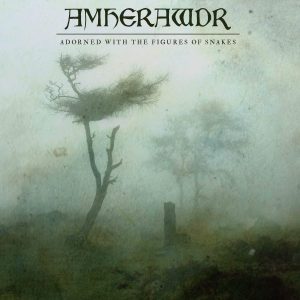 Amherawdr came together in 2010 with the goal to write heartfelt black metal inspired by the bleak romance and mysticism of ancient Britain. The band also recorded a handful of songs known as The Hidden Valley Sessions but these are sadly unlikely to see the light of day, unfortunately, due to too many internal differences resulted in an amicable decline which saw the delay of this release for so long…

The album is made of two parts with both being similar in length. The first part starts off calm, peaceful, with untroubled, tranquillity as we’re greeted with the soundscape of waterfalls, swaying guitars and a mixture of vocal combinations mostly harmonious but with a touch of despair. All this leads up to just over half the track when the fury erupts but even when it does, it’s wonderfully held back at a distance to let in desperation and misery all the while lurking in the background as the haunting undertones pull you in deeper.

The second part is the slightly longer of two tracks and starts of just a serene as the first – the guitar parts in this opening part are divine and I could’ve easily listened to this a little longer but on this occasion, the heavier side erupts earlier and I couldn’t help being encapsulated in the swirling mixture of torment and beauty. The clean vocals are overtaken by sheer rage as the drums thunder into in your ears and are unrepentant the majority of this track right until the dying moments.

I’m completely enamoured by the progressive and atmospheric intensity of this album as well as the lyrical content and hope Amherawdr will someday give voice again and claim their rightful realm.

I’m a married father of 2 humans, a rescue cat and a royal python. Not nearly enough tattoos or piercings, enjoys reading, Marmite and lots of coffee. View all posts by Rick