Sit back and prepare yourself in this moment of isolation to listen to lyrics of many incarnations with the powerful drum and bass of Thetan. The hip hop world can blend into the world of heavy rock and has done for many years. You may remember Kool Keith featuring in “Diesel Power”, a track from Prodigy’s groundbreaking album The Fat of The Land. 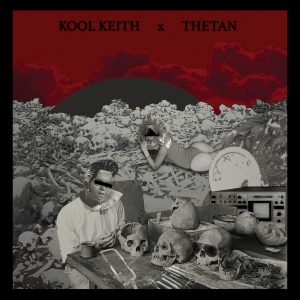 Dr Octagon showcases his flow suiting the heavy eerily fuelled bass, drums and synth of Thetan leading to “Let’s Take A Trip” which reminds me of a Cypress Hill beat of insane connotations. Black Elvis and Dr Doom appear in “Nite Heist” two of Kool Keith’s egos together. This feels the same when Mankind appeared on a WWE screen with Dude Love to introduce Cactus Jack.

“Complicated Trip” is exactly that. Keith tells a story of Dr Doom, Black Elvis and Dr Octagon together on a road trip as one. This isn’t your normal road trip story, just don’t yell shotgun, it may mean something else to these characters-of-one. Thetan consistently adds that edge to the tunes and makes the words sound darker than they are. Historically in Kool Keith’s work, he doesn’t hold back, but in Space Goretex he does.

Kool Keith is an exceptional artist. With him Thetan can create a sound that will continue to keep up the joy of being unnerved.

Space Goretex is out on April 10th