It’s always good news that there’s a new album imminent from thrash legends Testament. Having released a series of killer albums in recent years, anticipation is high for the next release –Titans of Creation. With two singles from the album already out and getting the mosh pits going at the band’s recent gigs, the new record is sure to be another awesome addition. 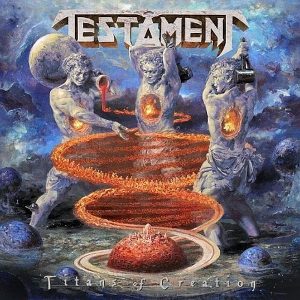 Opening the album is recently released single “Children of the Next Level”. The song begins with an instantly hooky riff in classic Testament style, simple and melodic. Immediately moving to the thundering verse riff, it’s an instant headbanger. The pace shifts seamlessly through half-time feels to all out thrash with some cool harmonised leads.The pace picks up in “WWIII” to a more thrashing tempo, with a bluesy flavour in the main riff and catchy chorus. From this point, Titans of Creation takes a few interesting turns. Testament are certainly serving some variety on this release with the more melodic NWOBHM feel in “Dream Deceiver” to the darker, heavier style of first single “Night of the Witch”. The former is a more straightforward and hooky tune that’s destined to be another single.The latter’s moodier riffing is complemented by the interplay of lead vocalist Chuck Billy’s deathly roars and guitarist Eric Peterson’s black metal-style shrieks, making for one of the heaviest track on the album.

“City of Angels” is something of an enigma, mixing a mysterious-sounding arpeggio with a sludgy riff. It’s an interesting combination that seems unusual at first but it grows on the ear. The middle section then changes briefly to a more galloped riff, with solos over all of these ideas. The song at times can feel long and meandering, yet at other times it flows fine. The unexpectedly abrupt ending leads into “Ishtar’s Gate”, which brings a more exotic melody crossed more simple yet hooky riffing on the bass before the guitars layer on top. More variety is on display in “Symptoms” with it’s infectious interplay of the main stomp and harmonised ideas – the shout-along chorus certain to get the crowd going at future shows.

Testament are performing on point on Titans of Creation with the tight and catchy riffing.The powerhouse rhythm section of drummer Gene Hoglan and bassist Steve DiGiorgio keep the band together while still having shining moments in their fills and precise technique. There’s no questioning the virtuoso guitar chops of long-term duo Alex Skolnick and Eric Peterson. The album is chock full of killer lead guitar moments complementing the catchy riffs. Stoic frontman Chuck Billy’s vocals are a highlight as always with a good mix of his classic singing, gruff growls and an awesome style that lies between the two – giving a perfect balance of grit and clarity.

The closing stretch of the album returns to a more upbeat thrash pounding. From “False Prophet” and “The Healers”, through “Code of the Hammurabi” and “Curse of Osiris”, the bulk of each song is more straight-up headbanging riffs. However each blends in cool moments plundered from the band’s various styles – including outright raging thrash, headbanging half-time feels, death metal flavours, harmonised and technical ideas, and more blackened darkness. Titans of Creation ends on a short instrumental “Catacombs” which has an epic, almost exotic feel, like a piece of music from a movie or video game. The synth is a little cheesy, but that’s not always a bad thing. The outro number feels unnecessary but doesn’t diminish the overall flow of the album.

Testament’s upcoming album, Titans of Creation, is another solid release in the band’s extensive discography. The now 8-year strong lineup of thrash legends sound like they’re enjoying making some awesome metal together, each having fun bringing in their own influences. It’s refreshing to hear some new ideas while the band stay true to their core sound. If there’s one critique, the record can feel a bit overlong at times. A more refined blend of the various ideas on display into a more compact collection of songs would make for a modern classic. That said, Testament certainly prove that they are titans of creating awesome metal with the latest release and the fans will be eagerly awaiting to mosh to the new tracks when they hit the road.

Titans of Creation will be available from the 3rd of April via Nuclear Blast. Order it via Amazon to help support this site!