Sentient Horror are a band from New Jersey who love nothing more than to worship the old days of Swedish death metal. I have had the honour of following this band since their Bloodbath-worshipping debut album Ungodly Forms in 2016 and The Crypts Below in 2018. Morbid Realms, being their second full length album released through Redefining Darkness in USA and Testimony Records in Europe, is a different beast altogether from their debut but still drowning in all things Swedish. What Morbid Realms shows is that Sentient Horror have enhanced their HM2 sound in an over-saturated HM2 scene but with inventiveness, creative song writing and maturity. Sentient Horror have created a monster of an album. 2019 has been a great year for death metal and HM2 sounding in particular, what with Gatecreeper and label mates Wretched Fate in particular. Sentient Horror deserve to be up there with those accolades with this album. 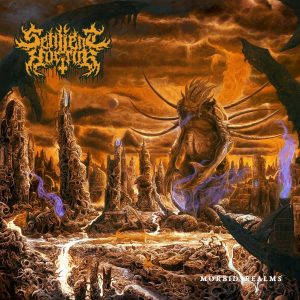 This could easily have been just run of the mill Swedeath but this album had so many highlights and memorable songs that allowed me to enjoy the hour long listening experience of this album. The first thing you notice between this album and their debut is the sound. Imagine going back in time with Left Hand Path being your favourite album due to its sound and then you get Clandestine. This is the same experience you get with Sentient Horror and their two albums, however, as with Clandestine, the difference and maturity of this album is jaw dropping. I must admit, I was nervous before giving this album a listen. Morbid Realms was an album I have been waiting on for quite some time, so I had set my expectations rather high for this one. My nerves were soon settled after listening to six minute opener “Call of Ancient Gods”. While there is the Dismember style riffs, I also hear Death influences throughout and mixed with Matt’s intricate and classic metal style leads, there is plenty for the young and the old to enjoy here.

One of the biggest, and an area that has never sounded better, is Matt’s vocals. As popular as old school death metal is right now, Matt has reached deeper into his lungs for a better vocal delivery and this is clearly his best effort to date. While almost coherent in places, think of Dan Swano and Edge of Sanity, and you will be just about there. On the Dan Swano link, he was in control of mixing and mastering and has done a sterling job on this record. But let’s get back to the music. You have to listen to the opening segment of “Bound to Madness” to get those Edge of Sanity links once again which is always a plus in my books. The riffs come forth at breakneck speed and when mixed with flashy classical solos sit together beautifully.

Sentient Horror are no tribute act but they do remember where death metal began and with the Dismember influenced “Sworn to the Dead”, they have this old man smiling from ear to ear. We also have our first blast beat from guest drummer and local musician Sean Meyers who has shown that he can play to multiple styles and play osdm very well indeed. Backed by bassist Tyler, the backbone of the band are in complete control of where the music flows and the pair clearly can work well together. Other ferocious and ripping tracks like “Ripped from Hell” are relentless but played with, dare I say it, fun. These guys are playing at full tilt here but they are playing with fun and honoured to have the opportunity to record songs to worship the old days. We, the listener, are honoured to be listening to a band that has gone from strength to strength in every aspect of songwriting and creativity.

“Obsessive Killing Disorder” – with a song title like that you can guess who the major influences are behind this. I also think this contains the best solo from Matt just before the two minute mark and showcasing his skills and technical prowess. But it’s the title track “Morbid realms” that shows Sentient Horror at their most diverse. Slow and mid-paced Swedeath in the vein of Edge of Sanity, Dismember, Entombed and even Grave come to the fore through this majestic track. Matt gives off his best growl I have heard him perform just before the five minute mark. This is definitely fitting to be the title of the album and would be my favourite track of the whole album due to the diverse riffs and overall atmosphere to the song. Just when you think it’s all over, you smash your living room into pieces listening to “Cemetary Slaughter” which is no ballad let me tell you.

Sentient Horror have with this album created ten songs of old school worshipping, arse kicking, face melting, head banging, fist pumping death fucking metal the way it’s meant to be played. Sentient Horror with the backing of Redefining Darkness and Testimony Records will surely shake the underground with this and I for one will look forward to seeing what these boys can do next. I hope that they can manage across the water again next year and even closer to home would be cool (Scotland would be great) as I would love to see them in the flesh. Good luck, guys, and keep having fun!

Morbid Realms is out on November 29th.