It’s always nice to get a pleasant surprise and Revisions was one in more than a single way. First off, I wasn’t expecting it to pop through my door and secondly… It’s really rather good. 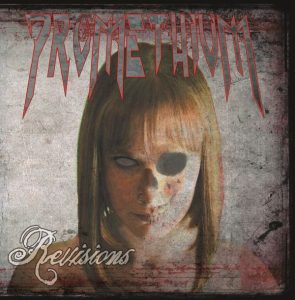 We’ve featured Promethium a couple of times on these pages, but Revisions is something different. The story behind it is simple. In 2017, the band were asked to play an acoustic set at SOS Festival. They relished the opportunity before realising that reworking your music to fit an acoustic stage isn’t as simple as pulling a few plugs out of the wall. The effort put in, though, was worth it and the set a success. And the seed was planted for this 2019 release.

Promethium sat down and plucked a selection of tracks from their earlier releases which they felt would suit being stripped to their bare bones. With just Daniel Lovett-Horn’s guitar and Steven Graham’s voice pipes this was quite a job, but believe me they’ve done themselves proud.

In all honesty, I’ve found the vocals on the “plugged” albums a little out-of-sync with the music. They’re good, they just don’t quite ring true. However, they’re perfect on Revisions. The emotion they carry flows so much better over the acoustic tones than the electric ones. From the incredible power of “Tribute To The Fallen” all the way through to far gentler “Son’s Revenge”, everything simply works so well. The addition of Hannah Morris’s harmonies on “Visions” is the icing on the cake for that particular song, and it stands out from others on the album as a result. I’m glad she only pops up there once, though, as it makes the song that bit more special.

Revisions is a superb release. It’s a must-have for fans of the band who will recognise the songs and (hopefully) appreciate these new versions. For those who never quite got into the band before, I urge them to check it out as well. It could be that this is the album you need to hear to appreciate Promethium from a different perspective.

Revisions is out now