Leeds-based death metal trio Cadaver Soiree got together with the sole intention of making music that pays homage to their idols and influences without trying to carve a new niche in the genre. Cadaver Soiree have only been active for three years and have already got a couple of releases under the belts, culminating in this, their self-released debut album, To Betray The Creator. 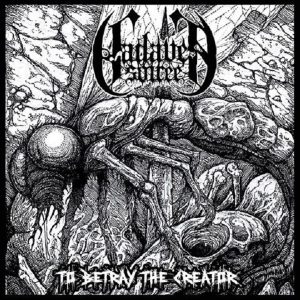 Opening with “Cordyceps”, I got an old school Benediction feel with vocalist Marc not too far away from the legendary David Ingram in his deep growling vocal style. Marc does use higher pitched vocals as well, showing off his skills as a frontman for the band. The song itself is mid-paced and the sound is clear but of an old school production. There is a touch of old Hypocrisy in there too with the use of keyboards, like the way they were used at the beginning of the death metal scene.

It was the next song “Limbless” that got me into this band and made me want to review their music. The heavy chugging riff at the beginning from Andy is reminiscent of a faster version of Six Feet Under’s “Lycanthropy” before the pace picks up slightly once more. Marc’s vocals are much “death-ier” than those on the previous track and a much-preferred style in my opinion. This is my favourite track from the album and when you listen to it, you will see why. It’s a homage to the Floridian death metal scene of old and while not reinventing the wheel, which the band is not wanting to do anyway, they play this style very well. With that song title, you can probably guess what the subject matter is and with the musicianship particularly savage, it is a very apt title indeed.

Carrying on the Floridian influences in their music, there are strong elements of Brutality in their riffs as well, especially with “Aeons of Lies”. They are more than mere copycats and know when to mix things up and add creepy keyboards in the middle of the song at the most appropriate time, giving a nice atmospheric feel interspersed with Andy’s melodic riffs. The next track to get my attention was “Evil Breeds Evil” with the keyboards interspersed with down-tuned swirling riffs from Andy. Blast beats make a welcome appearance on this song, showcasing that tempo changes are also very much in Cadaver Soiree’s repertoire. In fact, listening to it on a few occasions I got a flashback to Crimson-era Edge of Sanity if that’s any indication for you. The last song “Entombed in Dirt” opens with a riff that could be found on Entombed’s Wolverine Blues record. There are also the slow doomy parts a la Paradise Lost and My Dying Bride. Being the longest song on the album and over five minutes in length, they combine every influence they have and used them to construct the perfect ending.

With all the band references, it’s clear to see that the band are most appreciative of the boom that was the death metal scene in the late 80s and early 90s. Cadaver Soiree want to pay homage to that era of music adding deft touches to keep it alive, and alive it certainly is. This is as good a UK death metal record as you will get at this current time, showing the rest of the world that the UK can release good death metal the way it used to be played. Who cares for something original when you can play well constructed and created death metal like this?

To Betray The Creator is out now

[…] of reviewing Leeds based old school death metal band Cadaver Soiree who released their debut album To Betray the Creator to high acclaim. Cadaver Soiree are not in this game to create something new but to remember the […]