The story of how I discovered Nothgard is quite similar to how I discovered Omnium Gatherum. When I saw Equilibrium in Paris earlier this year, I got chatting to their lead guitarist, Dom R Crey, who is the front-man of Nothgard. At the time, I was not aware until I did my research post-show and noticed that he was the main man in that band. The band then posted their new video on the event page for the London show and I figured it was worth a listen, given that I love Equilibrium. I was not disappointed… 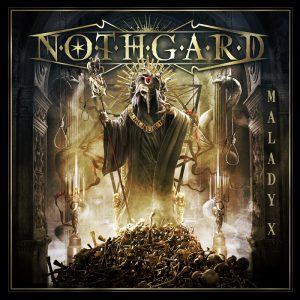 And it is that track which plays after a rather epic orchestral intro track. Referring to the modern world as a TV show, “Malady X” sets the scene for what is to come on the album. Classic riffs, the mid-pitched harsh vocals and superb guitar playing of Dom make this a track that you just don’t want to stop playing. “Shades of War” then follows on and could almost be called a Sabaton track with a more death metal vibe. Huge choruses abound with riffs that would be at home on a record from the Swedish powerhouse but equally work in this melodic death metal situation. The same could be said of “Guardians of Sanity” with the backing keyboard parts and uplifting melodies in contrast to the dark and expressive melodies that is normally found in music of this genre.

Arguably one of my favourite tracks on the album, “Epitaph” takes everything I like in this genre and kicks it into overdrive. Epic guitar solos, expressive lyrics and a chorus that you can’t help but sing along to, this is a classic melo-death track. The next track, “Deamonium I” however doesn’t really do it for me. I know it’s meant to be more of a ballad style track and Noora Louhimo (Battle Beast) is a very nice addition to the track, but I’m not really a fan.

“Serpents Hollow” however, now that’s an awesome track. Sounding like it was lifted from a recent Arch Enemy album, the track is more of a modern melodic metal track as opposed to a melo-death track (in the sense that I refer to it as. To be clear, I consider melo-death to be stuff such as Dark Tranquility, Insomnium and Kalmah and not stuff by Arch Enemy and Black Dahlia Murder). Having a faster pace than the other tracks on the album, it again is one of my favourites on the album due to it being that bit different to the other tracks. “Devil Will Know” brings back more of themes that have been explored on the album before with melodic riffing and more crazy guitar solos from Dom. Seriously, the guy is an impressive guitarist and quite underrated in this field in my opinion.

Picking from where the previous track left off, “Fall of an Empire” is another modern melodic track and one that would go down a storm live. With a chorus which could be screamed back by an eager crowd and a main riff that’s just the right speed to windmill too, it could turn out to be a fan favourite at shows. The last song with vocals on, “Herald of Death” continues the trend of before but instead of having an epic chorus, it has an epic feel throughout the track with the guitars and keyboards playing off each other to great effect.

Ending the album, “Black Horizon” is entirely instrumental and is also the first instrumental track that Nothgard have written. And I’ll admit, for a first time it’s really damn good. The choir that features in points breaks up the track quite nicely and it is also not too long which some instrumentals are guilty of being. Overall, a solid track which ends by fading out.

But I’m not done yet! There are two more tracks that feature on the special edition of the album which are worth mentioning. “Eye For An Eye” is the first one of these and shares a lot of the characteristics of the other tracks on the album the main being the huge choruses and the excellent guitar solos. The other track is something a bit different though, a cover of “Ninja” by Europe which sounds like the death metal version of Europe. It surprisingly works and sounds really rather good.

Having listened to bits and pieces of Nothgard’s back catalogue, it is clear that this album is different to previous ones from the band. Malady X feels much more mature, refined and has a sense of purpose about it. I personally feel that Nothgard have found their sound with this album and I look forward to hearing some of these tracks at the show next month in London.

Malady X is out now