Every so often, I get annoyed because right now, a lot of hard rock sounds the same. Don’t get me wrong, the quality is there but there’s only so much I can take. Black Orchid Empire are unabashedly hard rock. But like some of the most exciting bands of our time, they’re completely different to anything else out there. 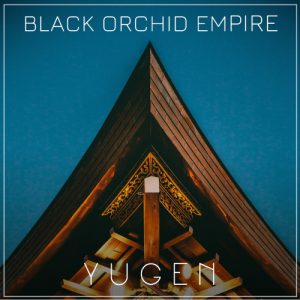 As a three-piece, you have to be a seriously good band to justify only the one guitar. Thankfully by the time Yugen’s opening track, “My Favourite Stranger” is finished, they’ve convinced me. With one of the meatiest bass lines I’ve ever heard coupled with early Soundgarden guitar work, it’s obvious this is going to be a special album. The fact I’ve not listened to much else in the past few days only further underlines that.

There’s an abundance of light and shade within each song, both are deftly balanced without sounding like a jumbled mess. With varied vocals and pinned against similar changing sounds, Paul Visser’s voice is dynamic and whilst not an incredibly unique voice, is a welcome change from the constant barrage of baritone sounds.

Songs like “Pins and Needles” at the back of the album show how to keep your listener engaged if you’ve been listening since the first track. Adding an extra layer of variance to the sound, the more alternative leanings stack up well with the songs with the harder edge such as “Burn” and “Mouth of the Wolf”. Whilst those songs may be more straightforward and cater to those with hard rock leanings, they still inject enough of their own identity to set it apart from the rest of the pack.

Elsewhere, there are delicate moments with the darkly acoustic “Vertigo” and the melancholic opening of “11 Years”. The latter is a short and snappy affair before it turns into a punchy rocker at the halfway point. Whilst it may seem like it’s a sombre parting shot, if anything, it’s Black Orchid Empire wrapped up in a nutshell, ensuring that even at the last moment, they’re capable of shock and awe.

With Yugen being Black Orchid Empire’s second album, naturally, it’s a tight effort and nothing outstays its welcome. Slanting a hard rock sound into alternative, it’s an excellent take on the genre. The songs have heft and variance without becoming too outlandish where you’d think there’s more than one band playing on the album. Instead, they all have a distinct Black Orchid Empire sound. And at the end of the day, some of the best bands sound only like themselves.

Yugen is out now