“As the ostrich when pursued hideth his head, but forgetteth his body; so the fears of a coward expose him to danger.” A quote from Akhenaten, Pharaoh of Ancient Egypt, and leader of the eighteenth dynasty, a person of intense intellect, he was also a man out of time. The long lost ruler of Egypt attempted to shift the religion of the country from a polytheistic-based religion, to one of monotheism, where everyone was to praise Aten, the Sun Disk. For millennia, the memory of Akhenaten was wiped from history; a rebellious leader who defied that which came before him. Now though, the Pharaoh lives once more, thanks to the Colorado-based death metal duo who have adopted his name for themselves. Recently releasing their third full-length album, Golden Serpent God, Akhenaten have traveled to great efforts to ensure that their music manages to sound just as powerful, as grand, and as full of new ideas as the ancient Pharaoh once was. 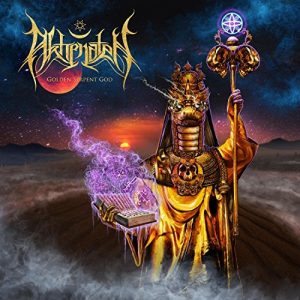 While a band centring their lyrical and musical themes around a particular historical society is certainly nothing new within the heavy metal scene, it is what that band does with their music and how they choose to present themselves that allows them to stand out. Akhenaten have clearly acted carefully when recording Golden Serpent God so as to not sound like Nile, with the overall feeling and style of the album being completely unlike anything else within the scene today. Akhenaten have taken chances with Golden Serpent God, something which has paid off in abundance, as the recording is more than just a collection of songs to listen to; it is an experience to behold.

“Amulets Of Gold and Fire” slowly opens the album, a quiet beginning, with long and low musical notes creeping into existence before fading out away to nothing, creating a real feeling of unease. This quiet does not last long, however, as soon, vocalist Wyatt Houseman soon rips through the tension, roaring loudly in a sticky, villainous, and distinctly black metal-esque style of singing. The initial feeling of unease quickly develops into fear, as you are surrounded by the monolithic music, the massive walls of sound making you feel insignificant and weak, small and unable to contend with the sheer titanic force being hurled towards you. Yet, within this fear, there is excitement. This different style of music, the Ancient Egyptian elements and atmosphere, encapsulates you, intrigues you, seeing you wanting more.

This is very much the way in which Golden Serpent God presents itself, leaning heavily on both the use of Middle-Eastern instruments and the traditional style of play found within Egypt, while infusing vicious, savage extreme metal. Though for many years, Nile were the band when it came to death metal centred around Egypt, I would suggest that their time may be coming to a close, and that Akhenaten are ripe for taking their mantel. The young duo are hungry, and through every subsequent release, have improved their overall sound and delivery. Golden Serpent God might be one of the best extreme metal albums I have heard this year so far, and for any true fans of anything heavy, this is something that you must listen to.

Golden Serpent God is out now and is available to order here.