I like a bit of power metal. I also like medieval stuff. Can’t beat two guys in tin cans beating bells out of each other, as witnessed at Bloodstock 2016! So when this self-released number dropped into the inbox it caught my eye. 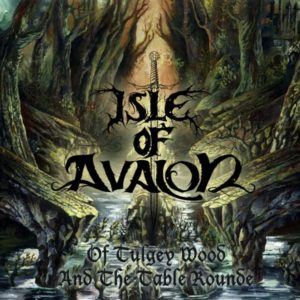 Of Tulgey Wood… is Isle of Avalon’s third release (as far as I can gather) and their first in nine years, though I confess I’ve not heard the earlier material. It’s the first to feature new vocalist Fædon Diamantopoulos alongside Alexander Wyld on electric and acoustic guitars, and Aimée Wyld who covers keyboards and orchestra as well as the remaining vocals.

This is an interesting album. Rather than being mainly metal with a bit of a medieval influence, it’s very much the flipside. While a couple of the songs are verging into the Gloryhammer style of power metal, most are definitely rooted in the far older genre with metal overtones. As such, I’d be more tempted to throw this to the progressive crowd as I really think they’d like it.

There’s no doubting the riffage present in “Castle Argent” and “Questing Beast”‘s thumping bass drum but the harpsichord strings are very much to the fore. “Trueborn” is the most heavy metal song of the ones on display, but even it’s got a jiggy lilt.

“Tirra Lirra” is pretty dark in places and definitely sounds more metal with haunting breaks, but “Lyre of the Lyonesse” is pretty much old-school through and through. And by old-school I mean from the days when “rock” was what you had to pull swords out of. “A Queen of Two Kingdoms” merges the styles with soaring rock guitars alongside far quieter balladic sections as both vocalists give their all.

Isle of Avalon have definitely produced something original. The old-style trappings of Red Rum, the medieval theme of Jaldaboath (but without the silliness), and very much keeping their lyrical and musical themes tight together. If there’s a criticism it’s that Fædon’s vocals can sometimes be a little reedy and buried under the music. Putting them just a little forward in the mix would have served them well, but this isn’t an issue throughout the album, just in a couple of places.

Of Tulgey Wood and the Table Rounde is out on October 1st and available to order now on bandcamp where you can hear three tracks straight away. CD copies are limited to 50 so get in quick!