Progger had a chat with Underwing a few months back and at the time they promised to keep us in the loop about their forthcoming EP Kaela Upsweep. Being nice Norwegian gentlemen, they stuck to their promise and in due course a copy of the EP found its way to us prior to release. So onto the player it went where, verily, it rocked the office. 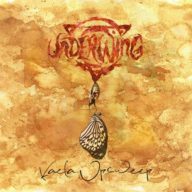 Underwing play a nice, groovy hard rock – they label themselves as progressive grunge, which is a new one on me! Nicely melodic with a heavy beat and hoarse vocals courtesy of frontman Enyeto. This is sit back and wallow music, the sort that crowds can lose themselves in at a live venue, nodding their heads and tapping the rhythm on their thighs with an open palm.

Opener “Sunless Seed” is six minutes of quality laid back rock music, but those minutes fly by – check out the brand new video for the song below. If “Sunless Seed” was laid back, “Reaper” is positively horizontal…which is strange to say when you listen to the track a couple of times as it’s got quite the heavy drum rhythm.

Underwing seem to have combined driving, pounding drums with slow, ethereal rhythms from the string sections. The two should simply not work together, yet somehow they just do. I’m sure someone who actually knows something about music can explain it to me – there are probably multiples of numbers of beats or something – but I just listen to stuff and decide if I like it…and I like this.

“Kaela” is the real hippy track on the album, the opening third being atmospheric scene setting before the band really let loose. Lead track “Paragon” is the closest to a barnstormer the EP has, kicking off with a comparative whirlwind of a riff before settling into something more ethereal and funky.

The five song run ends with the plaintive “Pay in Silver” which has a wonderfully soulful guitar solo in the opening section. It’s quite the mixture of styles, but overall is back to the “sit in the armchair, sippin’ whisky” style with a great blue-heavy final minute or two..

Kaela Upsweep is a beautiful if small collection of songs. I prefer my live music more upbeat, but this is definitely something I’ll be putting on again when I’m in more of a chill-out mood at home. It’s rock n’ relax, music you can tap your foot to while unwinding.

Kaela Upsweep is out on May 20th.