When I hear the name “Atmosfear”, my mind springs to an old 1990’s board game which used cutting edge VHS (!) technology to add depth. Staggeringly, the series is still going on DVD which is pretty impressive… but other than the name pretty unrelated to Italian band Pulvis Et Umbra’s latest full-length release. 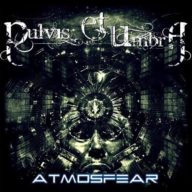 Atmosfear is a one-man production. Damy Mojitodka wrote and performed all the parts on it (three session members join him for live dates), making it an ever more impressive release than it already is.

Damy’s vocal style is verging close to the grindcore “pigsqueal” at times, but he mixes this up a little on some tracks (such as the title number) with some plain or whispered lyrics. Throughout, his voice rides just on top of the music, so it’s nicely audible. Accompanying it are some impressively heavy drum beats with a bit of added flair now and again, and twin guitars.

While the band’s style is usually labelled “thrash/death”, there’s a lot more going on here. “Atmosfear” is quite atmospheric, for instance, and “Crows Belong To Her” has taken a lot of influence from the black metal camp with even Damy’s vocal style changing a little to suit.

There are plenty of little bass-led breaks in most tracks as well, to give your neck a rest from the incessant thrashing. Some of these are almost prog-like, as are some of the time signatures and rhythms (take the opening to “Virus” as an example), adding another arrow to Pulvis Et Umbra’s metallic genre-quiver.

“Darkest Sorrow” is probably the track most likely to give you brain damage, with an unrelenting opening salvo before dipping into one of the livelier solos on the album. If the band want to get a pit going at a gig, this is the one that’ll do it.

Through the mellow-at-the-start-then-watch-out “Divinity or Icon” and later tracks, we pass through the truly evil “Blinded By Thoughts” before ending on instrumental number “Predominio Tecnologico” which makes use of a handful of samples to bring industrial into the mix. Perhaps an indication of ideas to come on future albums?

Atmosfear is an album to approach with an open mind. Yes it’s at the heavy end of the scale but it’s not scared to try new things and make a damn fine attempt at bringing some originality to a crowded genre.

You can catch Pulvis Et Umbra across the Eastern Bloc in May, and they’ll be hitting the UK in October this year.

Atmosfear is out now digitally, and on CD from the merch stand at live shows (for the moment)!