Formed in late 2013 from two other bands (Laserfox and Kiss Tribute band Destroyer) Rough Cuts is the Livingston band’s debut EP and came out last year. It’s hard to pin this sound down but it has hints of those early Aerosmith/Faster Pussycat/Kix days. Drop in a hint of Rhino Bucket meets Rose Tattoo and you get the picture. The EP is all crunching guitars, pounding rhythm from the drums and bass, and a singer who has a voice that could grate cheese. 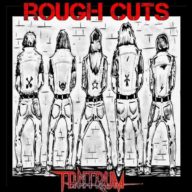 With “In Love with Anarchy”, my foot is going which is a good sign as the guitar intro kicks in. This track has a real Rhino Bucket vibe going on for me which I love. The singer, Adam, has a real rough voice with hints of Angry Anderson (Rose Tattoo) going on, and the band have a tight swagger behind him. You can just see this on stage in those small Aussie or LA sunset strip clubs. The drums have a nice constant beat feeding off the twin rocking guitars.

“Dirty Little Tease” keeps the vibe going with a big nod to early Aerosmith. There is some lovely guitar work on this track and I can see this being a good crowd chorus sing-along number, with its “Dirty little stop out, Dirty little tease” hook line.

“All Hail Rock N Roll” is another gritty piece with a killer crowd pleasing chorus, wrapped up with big chunky guitars and their twin Judas Priest attack swagger. “Get Off Your Ass!” has that old school L.A. Sunset Strip early Poison feel to it. There’s a lot of swagger and attitude going on in this song. The guitars again lead the way and they do play a pivotal part of what makes Tantrum’s sound, along with Adam’s distinctive voice.

“Runnin” has a nice catchy guitar intro, and nice twin guitar action reminiscent of Wishbone Ash in a lot of ways. Another groove hook laden track to end the EP with.

If you like that Sunset Strip, early Aerosmith tone, twin guitars, crunching drums, pounding bass and singers with attitude then this may well be the band for you. The production is not too bad, recorded and mixed by Robin Young at live rehearsals in Livingston in 2016. I think if they had a bit more of a fuller “in your face” studio sound this would have been awesome.

View all posts by Gary