We featured Beth and her Bunch recently as a Band of the Day, where we had a little chat. Now the words are all ours as we take a listen to their debut release Bad Habit. 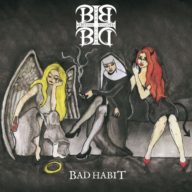 The first immediate comparison to be made when the sound of the band hits your ears is Halestorm. Beth has the same vocal swagger, and the lyrics are of the same hard-rocking ilk. However, this isn’t a rip-off act by any stretch. First of all, they’re bloody good musically. Secondly, they’re just that bit heavier than Lzzy’s mob. In the same general area, but complementary not clashing. Like two women who turn up to a party in dresses that at first glance are similar, but then you realise they’re just by the same talented designer and they both look equally lovely without one having to kill the other.

A quick look at the song titles – “Hell in High Heels”, “Beautiful Disease”, “Poster Girl For Pain”, “This Bitch Bites”, etc. – and even without listening you’d know this was a female fronted act. Or maybe drag queens. But female it is, and the eponymous Ms Blade has a great set of pipes on her. Each word is belted out clear as a noisy bell over the raucous noise produced by The Beautiful Disasters (Craig – lead guitar, Nicko – bass, Sam – drums). Once or twice she does stray into the sexy hoarseness trademarked by Lzzy Hale, but overall Blade has a style all of her own.

She stretches her legs a little with the song “Poster Girl For Pain”, a slower more balladic number. Despite the airy feel to the song, there are a couple of sections where her strong vocal cords still get a workout. This experiment is pushed further with “Angel With a Dirty Face” the only fault with which is Beth’s vocals getting lost in the mix a little during the louder parts.

Generally, in terms of subject matter and ethos the band come across as a female-fronted AC/DC. “Hell Yeah”, “Down and Dirty” and “If You’re Ready To Rock” are typical anthems, whereas title track “Bad Habit” is chock full of sexual innuendo.

Bad Habit is laid out well with a cracking opener (“Hell Yeah”) and rousing closer (“Legends Never Die”) which makes you want to just hit the “play on repeat” button with its references to Spinal Tap, AC/DC, Motörhead, GN’R, KISS, Queen and more.

There are plenty of “hard rock” bands out there, so it continues to surprise me when I pop a new one one for review and it blows me away. Albums like Bad Habit prove that rock and roll simply can’t die. There are too many acts like Beth Blade & The Beautiful Disasters writing and recording absolute belters. I’m very much looking forward to seeing them at Wildfire in Scotland this year. Roll on June!

Bad Habit is out on April 4th