Lovers of underground death metal will be no strangers to Italian stalwarts Lectern but I think their story is worthy of note before we start. Formed back in 1999 they released their debut EP Bisbetical the same year but then, like many of their peers, the band suffered from the general apathy towards, and lack of record label support for, the genre throughout the noughties. This imposed somewhat of an unwelcome hiatus on the guys in terms of production releases for eleven long years. 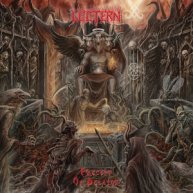 Despite this, the band stayed focussed on their cause, that of recreating that glorious early 90’s Floridian sound. They came back with a vengeance in 2010 with the release of EP Salvific Of Perhaps Lambent followed by a further three records including this their fifth, and second full length release. This admirable dedication to their craft makes them well worthy of checking out in my book.

As previously mentioned, Lectern make no secret of their love and dedication to that early 1990’s Tampa sound and as album opener “Gergal Profaner” mercilessly launches proceedings it’s clearly their key musical muse. That trademark scooped out crunching guitar sound and guttural vocals reign supreme here. Add to that some monolithic riffage and artillery-like drumming and the listener is taken back to a time when genre progenitors Deicide, Baphomet and Incantation were laying waste to eager hordes.

The guys don’t waiver and the album delivers nine tracks of brutal death metal in this vein and, while at times, an element of monotony can creep in, there is enough good song structures and excellent riffs to keep the listener interested. Tracks “Fluent Bilocation”, “Garn for Debtors” and finisher “Palpation of Sacramentarium” being fine examples with some crushingly good riffs at work. Furthermore, I also found the album to be a grower with my enjoyment increasing upon each listen, even appreciating what at first seemed a frankly bizarre/sickening twin guitar attack on track “Pelluicid”. A good sign in my experience.

We must also make a nod to the rather obscure song titles and while some may complain that they frankly don’t make sense, presumably some are lost in translation, I think it adds to the mix and if nothing else is memorable… “Diptych of Perked Oblation” anyone?

Equally worthy of mention is the fantastic old school satanic cover art by Indonesian musician and artist Adi Dechristianize, packaging up the whole ensemble rather nicely.

In a world of constant flux, Lectern stick to their old school roots which is both laudable and comforting in equal measure.  Check this one out.

Precept of Delator is out now and available on Bandcamp.

Band of the Day: Lectern