I can still remember that feeling; the anticipation, the excitement, the nerves of releasing new material to the public and this is even more so when releasing your debut EP. Milton Keynes based Fragile Things have been here before though. Created from the remnants of Heaven’s Basement and Endless Mile, Fragile Things have already got themselves a great reputation as a live band, having undertaken dates with Slam Cartel amongst others. 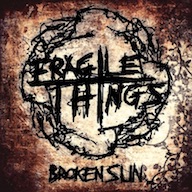 The key with a band like Fragile Things (and this a lot harder to achieve than you may think) is whether you can capture the energy, the buzz and wantonness of those live performances on a four track CD. To fail to capture the true essence of the band would be to let themselves down and would wildly undersell them. Thankfully, though this may be a self-released EP, with Broken Sun Fragile Things have easily smashed that benchmark. This is an EP that makes you desperate to go and catch the band live. It is immediate, full of vitality, has tons of energy and has four equally great tracks.

My immediate feeling when I first listened to the EP was that it has a great classic rock vibe to it. I can hear everyone from the Little Angels, Def Leppard and maybe a touch of Skid Row thrown in there. To me it’s classic rock, but with a nice edge of sleaze to it.

I think the essence of the EP can be summed up by title track “Broken Sun”, one of the two standout tracks. It’s not the EP opener but easy to see why it influenced the title. This is a great classic rock song and this is what impresses me the most about the EP. The recording and production levels are just right. The songwriting is brilliant, these songs are well crafted, the right balance between chorus, bridge, middle eights and guitar solos. No one person or part ever takes over. This is a band.

Equally as good is “So Cold”. As a song, it just so effortlessly flows, from the opening riffs and introduction of the vocals, right through to the high energy and catchy chorus. It is timeless in its delivery and it is this evergreeness to Fragile Things that I think is going to appeal to a lot of people. As you listen to “Broken Sun” you could be in your favourite rock club, beer in hand just living the moment – air guitar maybe? During that solo, you know you would. Could you ask for more?

Any four of these songs are good enough as the opening track and I look forward to seeing more of Fragile Things. Time, experience and the continuation of this EP promise a cracking debut album when the time is right. In the meantime, go and see them live, sing out loud, play air guitar and get lost in the moment of what these lads have to offer. I promise you will forget the rest of your worries when Fragile Things hit the stage based on these four tracks.

Broken Sun is out on February 17th