Seeing as the album comes out today/tomorrow (delete as appropriate depending on what side of the Atlantic you’re on) it kind of makes sense to pop up this review of Korean Fire Drill’s More Badass Than Half Ass. It’s recommended for fans of the likes of Psychostick, Bloodhound Gang, Green Jelly… you know, the humorous side of rock and metal. 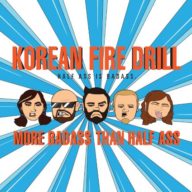 While not quite as gutter level as Psychostick and GJ, Korean Fire Drill are still nicely silly. Their music isn’t as over-the-top as those bands’ either, meaning that the songs don’t depend on the humour, it’s just a bonus. At first glance, the album looks like ridiculous value for money with 26 tracks, but almost half of these are voice-only “skits”. The album tells the tale of the band hiring new vocalist Lydia Gavin, sacking her, being forced to rehire her… and the resultant shitstorm. Having the background story being told through voicemail messages adds an amusing “concept” to the track, linking the songs together (and explaining why she’s not on all of them) while having the skits as separate tracks means you can skip them if you just want to listen to the music.

Ah, the music. Well, we have a bunch of covers which, unusually, front-load the album rather than inhabiting the “bonus content” section as you’d expect. They’re good, too – “California Love”, “Barracuda”, “The Bad Touch” and something about a fox that I think some of my pupils were going on about a couple of years ago.

The original content’s not bad, either. A little heavier than your “traditional” heavy metal, but with pretty clear vocals and varying between “sounds plain, but wait… what’s he singing about” to “this is silly” (like “Austin Texas” which just squishes together rock, metal and country because why not?).

Strangely, there are two songs which are names after other artists, although I link “Kanye” to “artist” in the thinnest possible way and I actually don’t think Scissor Sisters is about the popular beat combo either. Erm. If you know where said band got their name from…? That.

Tracks like “Scissor Sisters” and “Live Like Us”, which are comparatively light and catchy alt-rock, are counterpointed by heavy groove-laden beasts like “Bitch Box”. There’s really no target audience for the album musically beyond “rock” which is fine by me. Variety, spice, life and all that. However, to some people with narrower tastes, it may mean a couple of tracks get skipped on each play-through which is a shame as there’s nothing on here that doesn’t deserve to be listened to.

Korean Fire Drill are a band out to have fun, and I gather they do a damn good job of this when they play live. Here’s hoping we see them on British stages sometime in the near future.

More Badass Than Half Ass is out on November 29th.