In 1993 music changed. A new sound appeared on the scene. One that changed it for me. A moment Nu metal came to the forefront. A live gig at London Astoria in 1995 or 1996 happened. Performing live was a 5 piece from 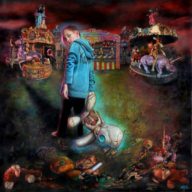 Bakersfield who go by the name of Korn. That was over 10 years ago and is still one of the best gig I’ve ever been to.

Centre of the stage that night was a lone mic stand…the lights went out. Front man Jonathon Davis walks to the mic grabs it while still attached to the stand. Leans back and screams “are you ready?” and this is what you call an epiphany. Throughout the night Davis blew his emotional wad over us all. Fieldy holding the head of the bass towards the lights. David ‘Head’ Welch couching over his guitar like a contortionist. James’ Munky’ Schaffer firing out those chords while staring emotionless into the crowd. David Silveria blasting the drums like a nu metal animal. This is the moment a genre evolved. This is Korn, and they just blew my mind.

Twelve years down the line. The line-ups changed. David ‘Head’ Welch moved to another aspect of life and embraced God. He’s now back in the fold. Drummer David Silveria has moved on to another part of his life, and the drumming position has been taken on by Ray Luzier.

On the 21st October Roadrunner records welcome Korn back for their 12th, yes, Twelfth studio album and the first one with RR since 2011. This is The Serenity of Suffering. I’m not going to lie. I’ve not listened to a full Korn album since Follow the Leader. Which I think came out in 1998. So much has happened since those wonderful nu metal days. Sadly, with great bands like Korn it springs off wannabes. The wannabes in my opinion aided in the death of good Metal clubs in London. But that’s another story and for another time.

A burst explodes. Korn are back with “Insane.” These short guitar eruptions bring the memories flooding back. Davis’ unique style hasn’t been lost, he allows you to feel every word.

“Rotting in Vain” has a great video featuring Tommy Flanaghan which you can see at the bottom. “Black is the Soul” and “The Hating” continue the emotional roller coaster of Jonathon Davis anger at the world. A man that can do so much with his vocal cord is as scary as how many movies Nic Cage says yes to.  Cage must have read ‘Yes Man’ by Danny Wallace.

Ever seen the Jetsons and the Flintstones crossover, or Family Guy and the Simpsons? Sometimes they work, sometimes they don’t. “A Different World” is a crossover that works. Slipknot and Stone Sour front man Corey Taylor makes a guest appearance. He doesn’t overthrow the moment or try make it a Corey Taylor track. With him and Jonathon Davis who explodes with a variety of vocal ranges makes this is a highlight for me. Two worlds collide. Two monsters of rock together. I caught myself saying out loud “Feel me. Kill me. My backs against the wall” not very wise while food shopping in Lidl?

In “Everything Falls Apart” Davis repeats “There is nothing in my head” the anger rises. Korn have always had a gift to put their spin on emotion. Schaeffer and Welch duelling on guitars have always given the sense of something is about to happen and it is. Davis repeats the same sentence in so many emotive styles that it’s difficult to not say it yourself and feel it.

Back in the day when Korn arrived on the scene, when Bagpipes were the chosen instrument, when “Shoots and ladders” gave a new meaning to nursery rhymes. I miss those musical days, I do. I cannot lie. But. The Serenity of Suffering has brought those senses back. There isn’t a duff track and that is my opinion and like arseholes everyone has one.

In “Next in Line” has these dark creepy lyrics. “It’s the pretty little way you hold your head” lyrics that would be wonderful for a boy band. You’ll see the tears in their screaming fans eyes. The difference is. This sentence isn’t sung by a boy band. It’s Jonathon Davis who bounces these words from within his soul. Together with Fieldy caressing that bass makes it scary. You wouldn’t see this on the new James Bond movie, you’d see it in a Guillermo del Toro one.

I haven’t been this pumped for a record for many years. Witnessing them live back in the day and seeing their changes over the years with certain styles may be a taboo subject. But. If you break this record, it will bleed Korn blood. Their soul is in this.

I’m not sure what they are like 10 years down the line as a live act, but they are over here touring with Limp Bizkit. You may hear “N’ Together Now” or you may not. You may hear “Wicked” with Fred Durst doing the Chino Moreno section. But whatever happens I’d recommend you get this album, see them live and feel the spit.