What can I say about the legendary Darkthrone? I find this question somewhat easy to answer: a Black Metal band that is more renowned in the extreme metal scene, from 1991 when the band finally embraced the genre that they have stuck to. However, in recent years the band have been criticised with their later releases.

Yet I truly believe that with Arctic Thunder the band have returned to their roots, especially with the opening track “Thundra Leech” which I found to have a raw and heavy sound. It is carried with the battery, and with the use of a range of tempos more depth and dimension is added to the track. For me the song is power-enraged with so much going on in terms of dynamics, from the wailing guitars and pounding drums, making it an explosive and enjoyable start to the album. 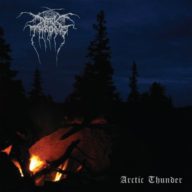 Moving forward with the album, the more I listen to it the more I realise how dynamic the album really is. There is a lot more outside influence that sounds like it comes from the early Black Metal scene, and even influences from a more recent Black Metal sound… and a traditional metal sound. This is most notable in the track “Boreal Fiends” as the whole track is plunged into the depths where the overall sound is darker and downtuned, and the drums have almost a hypnotic trance. The sensation is completed with thundering vocals which just make the hairs stand up on my neck. A phenomenal track that makes me think of later Satyricon.

Another thing I have noticed with Feriz in this album, is how much his vocals sound similar to early Celtic Frost. It has really made me think (I have said it before and I will say it again) how Darkthrone have returned to their roots. You can really hear this on the title track of the album, “Arctic Thunder”. Every element on this track comes together in uniform to create an eccentric form of art. Everything from the vocals to the battery, even as the guitar melodies get stuck in your head creating the perfect sound and a very easy track to fall in love with.

The rest of the album is pure gold – catchy and with a pure raw sound, especially with “Deep Lake Trespass” where the song grabs you by the ear drums and transports you back to a land of dark beauty. A wonderful and pure heavy sound that I get straight into.

Arctic Thunder is an album that is as pure a black metal album in every way it can be, with so many different elements behind it coming together to create a Hellish inferno of a release. Darkthrone have managed to create an explosive product, and an album that I can say honestly as a true masterpiece. Fenriz and Nocturno Culto have created a classic, one in which I can find no flaws at all.

View all posts by Aoife

Good review, but one correction: Fenriz doesn’t do any vocals on this album, it’s all Nocturno Culto.