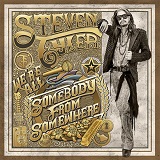 When our esteemed Editor-in-Chief posted “Ooh… Steven Tyler solo album for review… Anyone a big fan?”, the answer had to be “FUCK YEAH” as I’ve got a nice long history with Steven Tyler, and Aerosmith. Aerosmith were the first band I got into – back in the late 1980s/early 1990s, it was really bloody difficult to get hold of their pre-Permanent Vacation (1987) output but I made it my mission. I bought and listened to as much as I could, and they were MY band. In April 1992, when I reached the ripe old age of 18, I went out and got my first tattoo and there it still is at the top of my right arm – the Wings logo.

Fast forward to today and I still love them – I still get a huge buzz out of listening to their absolutely magnificent fourth album, Rocks (released in 1976) – all killer, not a hint of any filler. And I can listen to anything they put out and enjoy it – even if there are faults, I still enjoy listening to what they’ve put together. One of the major problems I’ve had with their post-Permanent Vacation output is the proliferation of ballads on their albums. Want to get me started on this, just ask me what I think of the “Cryin’/Crazy/Amazing” combination on Get a Grip. It’s not that I don’t like their ballads, it’s just that I can’t be doing with the over-production of those very songs. It began when I got hold of their earlier albums and heard the ballads on those – “Dream On”, “Seasons of Wither”, “You See Me Crying”, “Home Tonight”, “Mia” – and compared them to the likes of “Angel”, “What It Takes”, and then that led to the triple threat I mentioned earlier. And don’t even mention that abomination from the Armageddon soundtrack.

Aerosmith today? Well, it looks like they are on the road to leaving us – Steven Tyler recently stating that the next world tour is likely to be their farewell jaunt.  Plus there have been health scares over the years – Tom Hamilton’s brush with cancer, and Joe ‘Fucking’ Perry recently taking ill playing with the Hollywood Vampires super-group in Brooklyn. And the band themselves haven’t exactly gotten on well over the past few years, what with a few public spats about certain members of the band not being available and being more interested in their solo project.

And that’s where we are now….We’re all somebody from somewhere is Steven Tyler’s first solo album. He’s been in the business since the mid-60s, then formed Aerosmith in 1970 and been pretty much involved in there since (bar a few periods where either the band split up or weren’t exactly interested in doing anything together) and he’s only gotten around to this recently – the cynic in me thought that it may have happened during the mid-90s when arguably Aerosmith enjoyed their most prolific hit period but nope….it’s now. Why now? Well, in the past few years Tyler has become known more as Steven Tyler than as Aerosmith’s lead singer Steven Tyler, mainly due to his involvement in the American Idol TV series. So why not enjoy the limelight a bit?

Billed as a Country album, I’d already set myself up to not enjoy this at all so if it’s not good then I’m not going to be too bothered about it. But, you know what? There is more than enough of a Blues influence to keep it away from being exclusively Country. There are those tell-tale guitar sounds that the genre has, but not enough for me to think Oh god, it’s Garth Brooks – hey, maybe I haven’t listened to enough Country over the years to actually recognise an album of the genre? RESULT!!!

And it also doesn’t suffer from over-production – it’s very stripped back, and again I’m surprised by this. And this leads me to what I had originally feared before I even played the first song on the album – ballads, and how many of them will there be? Well, opener “My Own Worst Enemy” is one of those…and it’s the first Aerosmith related ballad I have truly enjoyed since I heard “What It Takes” back in 1989. The funky album title track then stomps along and leads in to “Hold On (Won’t Let Go)” with its broody Blues tinged feel. So far, so good – I’m impressed.

“It Ain’t Easy” is up next, second ballad of the album, and again I enjoy another ballad. Either I’m mellowing in my old age or these songs are actually quite good…..and I don’t think I’m mellowing at all.

So, at five songs in we hit my first stumbling block – “Love Is Your Name”. On first listen last year, when it was released as a single, there was something about it that I couldn’t put my finger on but on second listen here I’ve sussed it out. If you’re a parent then there is a chance that you’ve seen the Disney film ‘Bolt’ – and if you have then in the middle of that film is a song called “There is no home like the one you’ve got” and this song reminds me so much of it. I’ve seen Bolt too many times to count now, and unfortunately that ruins the song for me. The next song “I Make My Own Sunshine” doesn’t fare much better – it’s a bit too happy for my liking.

The rest of the album? It flutters between the good (“Gypsy Girl” and “Only Heaven”) and the great (“The Good, The Bad, The Ugly & Me” and “What Am I Doin’ Right”) with a side-order of the not-so-good (“Red White & You” and “Sweet Louisiana”) and amongst all that those ballads keep impressing.

The closing two tracks are both covers – first up is a reworking of “Janie’s Got A Gun”, from Aerosmith’s Pump. And what a version this is…..even more brooding that the original, and considering the subject matter of the song it works so well. Then the Soul classic “Piece Of My Heart” gets the treatment, and again is more than adequate.

All in all, this album has impressed. There are problems that I have with it, but then I’ve had problems with most Aerosmith albums since Get a Grip so I’m used to that now. If you’re a fan of Aerosmith then you will most likely be checking this out anyway, but if you aren’t then give it a go anyway.

View all posts by Dave