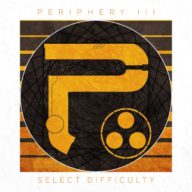 If you’ve stumbled across my bio one thing is clearly evident. My love for progressive metal giants Periphery. So try to imagine how I felt when our lovely head editor sent me a copy of their latest album Periphery III: Select Difficulty. I squealed with joy!

This comes in as their 5th full length album, just a year and a couple months after the dual concept album release of Juggernaut Alpha & Juggernaut Omega. The announcement was a surprise to many in the wider community, whom were shocked at the considerably short album cycle of their last release. However those who religiously follow the band *cough* me *cough* would have seen album updates through guitarist ‘Misha Mansoor’s’ YouTube channel. It came as no surprise to many of us that the band were able to churn out a new album after just a month of writing!

As with their previous release, Periphery recorded and produced the album themselves – with bassist Nolly Getgood fronting this. Periphery’s tonal precision and perfection of recording and mixing albums is well known by many within the progressive metal community – and once again end product is absolutely flawless. I shan’t get too much into the technical side of things, but the drum tones on this album achieved – without no hit replacements – are absolutely phenomenal. This album has one of my favourite mixes of all time!

Fan-girling aside this 11 track album is nothing less than a masterpiece – a perfect example of progressive music that can also be catchy and memorable – not just for it’s complexity but also for the more simpler moments on the album.

I’ll know go through the track-listing and sport a few comments on each track.

Price Is Wrong – Opens the album with mean and heavy intent. Though is relatively less complex musically to other tracks which was a moderate shock to many as this was the first single released off the album. Vocalist Spencer Sotelo shows off his dark side with sustained ‘dirty/harsh’ vocals throughout the track.

Motormouth – The first thing that struck me was the impressive drum work and almost malevolent atmosphere it creates. Very reminiscent of material off their self titled first album ‘Periphery’.

Marigold – A huge contender for my favourite track of the album. Perfectly balanced in terms of ‘heavy-ness’, and well thought through compositional features such as use of orchestral timbres. Animated music video was really quirky and cool too!

The Way The News Goes – A few showpiece clean guitar riffs. And some unbelievable contrasting moments: From soaring clean vocals over blast beats, to a pretty heavy ending finalised by a beautiful piano outro.

Habitual Line Sleeper – Insane drumming by Matt Halpern, showboating the song’s brutally heavy opening – definitely much heavier than earlier periphery. A wide palette of vocals and great harmonic progressions towards the end make this song quite a handful!

Flatline – A very good example of the combination of styles and music qualities periphery bring to the table. Catchy chorus too!

Absolomb – The track kicks off with an emphatic and ballsy bass riff featuring complementary clean guitars riffs, and features two beautifully melodic solos and huge choruses once again! It’s one of the lighter tracks of the album, but fits well in the track listing order and offers a completely different atmosphere and build up to any of the other tracks. It also features an orchestral outro. This is my fav track off the album!

Catch Fire – Is shortest song of the album and slightly more radio friendly than others. How many times do I have to say it, the choruses are just so frickin good! Periphery have stepped their game up so much in writing catchy and memorable choruses.

Lune – One of the few tracks on the album to start off with a slower build up -which contributes to this being the longest track on the album. The track features emphatic vocals, good use of orchestra, lovely and ambient moments, great harmonic moments. The track is a huge contrast from the beginning – almost like a move from darkness to light being an overall theme of the album. The album finishes with a beautiful orchestral ending.

Periphery III is an album that excellently combines the forces of six extremely talented musicians that do absolute justice to the music genre they’re in by continually pushing the boundaries in all aspects of music they create.

This album I feel will by well received by all and will draw more people into the progressive metal/Djent scene, showing that metal can be intricate and delicate whilst simultaneously being heavy as f*ck!

View all posts by Dhylon